The Real Cost of Heroin Addiction

The rise in heroin abuse and addiction represents a real national threat.1 The relatively low street costs of heroin and its widespread availability across the U.S. may make heroin both more appealing and more accessible to users, which can lead to a higher risk of overdose and other dangerous complications.2

Heroin poses a serious threat, especially when the number of heroin-related overdose deaths is taken into consideration. While lower heroin street prices and its availability may seem initially appealing to users, heroin’s heftiest, most deadly costs are hidden.1

Many users start using heroin after their prescription painkillers such as OxyContin become too pricey or not as easily obtainable.1 While turning to heroin appears to be a less expensive opioid substitute, often the hidden costs of heroin are discovered only when it’s too late to undo the consequences of a dangerous, newly formed habit.

When discussing how much heroin costs, it is important to look beyond the cost individuals pay for it per se and focus on the bigger picture: the hidden financial, physical and personal chaos that results from this destructive drug.

The following information will also help you better understand how to best help someone who might be battling a heroin addiction and how to approach them about the issue.

The Street Cost of Heroin

How much does heroin cost on the street? The street price of heroin depends on a number of different factors, including source, location, type of heroin, heroin purity levels, and others. However, the street price of heroin has been much lower in recent years than in past decades.2 Although heroin purity levels are constantly fluctuating, heroin today is much higher in purity and lower in price. All of this is the result of a dramatic increase in drug trafficking in recent decades.1

Increased availability of heroin, which has also been associated with increased use and overdose, has has the same effect on the street price and price per gram of the drug.4

Heroin has not only been acquired literally on the streets but has also been increasingly acquired online. Easier access to heroin means more users and more costly consequences – both for the user and for society. 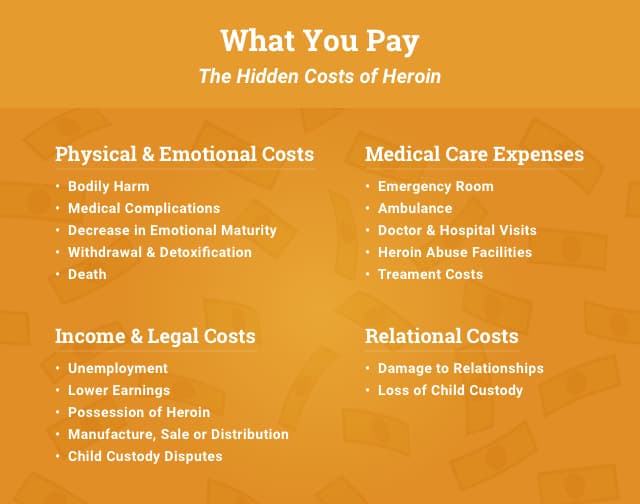 The Hidden Costs You Pay

While the street price of heroin may appear cheap, individuals end up paying more than just the street value of heroin out of their own pocket, depending on their healthcare plan coverage.

In addition to higher medical and legal expenses, costs can include lower income levels, relational costs, and physical/emotional costs.

Below are some of the hidden costs of heroin individuals may face as a result of heroin use.

A variety of physical consequences may result from using heroin that require important medical attention and treatment.

Costs and ranges listed in the table below are U.S. averages and estimates in U.S. dollars for all types of medical needs, unless stated otherwise; costs vary by city, medical organization, type of health insurance and individual medical needs:5-12

The legal costs of heroin use may include prison time, along with federal and state fines. A person may also find themselves getting caught up in child custody disputes, in the event that they have children and are charged with abandonment or neglect.

Below are estimates of typical costs which can vary by state and by type of child custody dispute:13-14

Heroin use will often lower a person’s total income  either by causing them to neglect their job responsibilities or by removing them from an income-earning environment:15

In addition to financial consequences, one of the greatest price tags of heroin is its ability to destroy and even take a person’s life.

Heroin affects more than just the heroin user. Relational dynamics with others can severely change for the worse when a person uses heroin:19

“Letter to heroin” published after teen’s death: “Dear Heroin, I never want to touch you ever again, you’ve ruined my life, made me steal from my family, on probation ’cause of you, why I choose you I don’t know? You’re the worst thing that ever came into my life. Yes, I did love you but now it’s time to say goodbye…” Read the rest of Hannah Meredith’s letter.

Using a cost-of-illness approach, costs can be estimated in four broad areas:15

According to estimates, the cost of heroin addiction in the United States was $51.2 billion in 2015 US dollars in terms of productivity losses, criminal activities, medical care, and social welfare.20 The large economic burden resulting from heroin addiction highlights the importance of investment in prevention and treatment, although these activities have an economic impact in their own right.15

Increased availability of heroin in the U.S. market has led to a considerable increase in demand for and use of heroin. Another reason for this stems from the fact that many controlled prescription drug abusers started using heroin due to price differences, its availability, and the reformulation of OxyContin®, a commonly abused prescription opioid.1

There is another way in which to look at heroin costs, and that is the overall “societal cost” brought about as a result of this drug’s presence in our cities and towns. In the year 2015, the societal cost was $50,799 per user.20 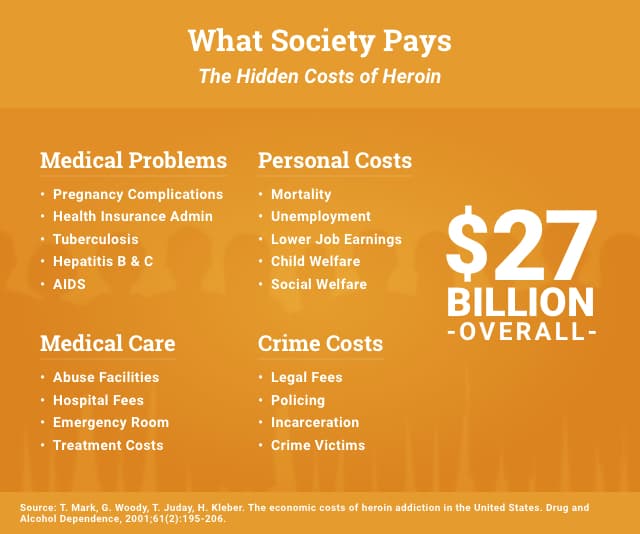 The U.S. Government has estimated that the nation’s overall annual expenditure on heroin was roughly $27 billion dollars in 2010 and rose to $46 billion in 2016.21 Most of this tremendous figure is due to productivity costs of heroin users (mortality, unemployment, incarceration, etc.).20

Medical complications and conditions such as AIDS resulting from heroin use account for society’s next largest set of costs, followed by heroin-related crime costs and medical care costs.20

According to several conservative estimates, every dollar invested in free or low-cost addiction treatment programs yields a return of between $4 and $7 in reduced theft, drug-related crime and criminal justice costs. When healthcare-related savings are factored in, total savings can exceed costs by a ratio of 12 to 1.22

How Much Does Heroin Addiction Cost?

However, heroin has repercussions that extend far beyond its direct effect on the individual with a heroin addiction. The impact is devastating in terms of medical and social consequences, including health risks, fetal effects, crime, violence, and disruptions in family, workplace, and educational environment.23

How Much Does Heroin Cost?

Many factors affect the street price of heroin, including the type of heroin used and its purity, i.e., how the drug is “cut” and processed and how available it is to the public in an area at a given time. Instead of focusing on heroin price per gram, the focus is on the typical unit price of heroin, which is about 1/10th of a gram, the average single dose:25

According to research done in Detroit, Michigan, an individual may spend as much as 75% of their total income on heroin.25 The reason for such a high daily spending habit has its roots in the nature of heroin addiction. Withdrawal symptoms may appear within 8–12 hours of the last dose of heroin, which explains the need for frequent consumption of the drug.16 As individuals become more dependent on the drug, they build tolerance to it, meaning that it takes more and more heroin to get high. This leads to an increasingly expensive and increasingly dangerous habit and the constant threat of overdose.

How Much Does Heroin Cost Per Gram?

How Much Does a Bag of Heroin Cost?

How Much Is a Kilo of Black Tar Heroin?

The black tar heroin, ranging in purity from 20 to 60 percent, is dominant in California, easily obtainable and plentiful. Prices range from $15,000 to $80,000 per kilogram.27

How Much Does Heroin Cost the User Per Day?

Individuals with a heavy addiction to heroin spend a significant percentage of their income on heroin.25 The cost of heroin use is dependent on heroin consumption pattern, duration of use, availability, number of suppliers in the areas, distance to suppliers, and others. All these factors  determine the number of bags consumed per day, unit purchase amount, and the number of bags purchased over a given period of time.25

Why Is Heroin So Cheap?

The street prices of heroin has been much lower in recent years than in past decades, although it is not clear if the increase in demand has led to the increase in supply or the other way around.2

One of the main reasons why heroin is so cheap is because various cheap agents are used to “cut” the illicit drug. The purpose of mixing these agents with heroin is to increase the volume of supply and obtain larger quantities of the finished product and/or mimic the effect of heroin.29

Why Is Heroin More Popular Than Other Drugs?

The reason why heroin is so popular may be due to the low cost and high availability of the drug.2  Key to prevention of heroin use is reducing exposure, but this is exceedingly difficult since the drug is so widely available.  Increased availability of heroin, associated with a nationwide increase in heroin use and overdose, may have been partly caused by the efforts to reduce the availability of prescription opioid analgesics.4

While the “high” produced by heroin is frequently reported to be a significant factor among individual users, the main reason for switching to heroin seems to be that the drug was both more readily accessible and much less expensive than prescription opioids.31

Along with a considerable increase in production of Mexican heroin, there has been an increase in availability of the easily injectable white powder heroin due to domination of the U.S. market by Mexican and Colombian heroin sources.4 It is estimated that heroin consumption increased by 10% per year between 2010 and 2016, which has led to changes in the composition of heroin use and a notable increase in use among individuals without criminal history.21

How Much Does Heroin Rehab/Treatment Cost?

If you or someone close to you shows signs of abusing heroin or signs of struggling with addiction to heroin, it is important that you reach out for help such as a specialized heroin rehab program and seek more information on financing options and insurance coverage.