According to the Centers for Disease Control and Prevention, fentanyl has become the deadliest drug in America. It’s an incredibly potent substance that is taking lives across the U.S. at never-before-seen rates. For this reason, The Department of Homeland Security is reportedly considering classifying the drug as a weapon of mass destruction.

Fentanyl is a synthetic opioid, which was developed originally for the purpose of pain treatment. It’s “approximately 100 times more potent than morphine and 50 times more potent than heroin,” according to the DEA. As a pharmaceutical product—in formulations that include sublingual tablets, transmucosal lozenges, transdermal patches, nasal sprays, and injectable solutions—fentanyl has several medical uses. However, because of its potent high, illicit supplies of the drug have become increasingly widely abused.

Because of how dangerous this drug has become, we decided to dig further into the data associated with its use across the United States. We used mortality data released from the CDC to find the number and rate of deaths due to fentanyl by state and nationwide, then summarized the findings. Read on to find out which states have the highest rate of mortality, and to see how these have changed year-over-year.

Fentanyl Mortality Rate in Every State 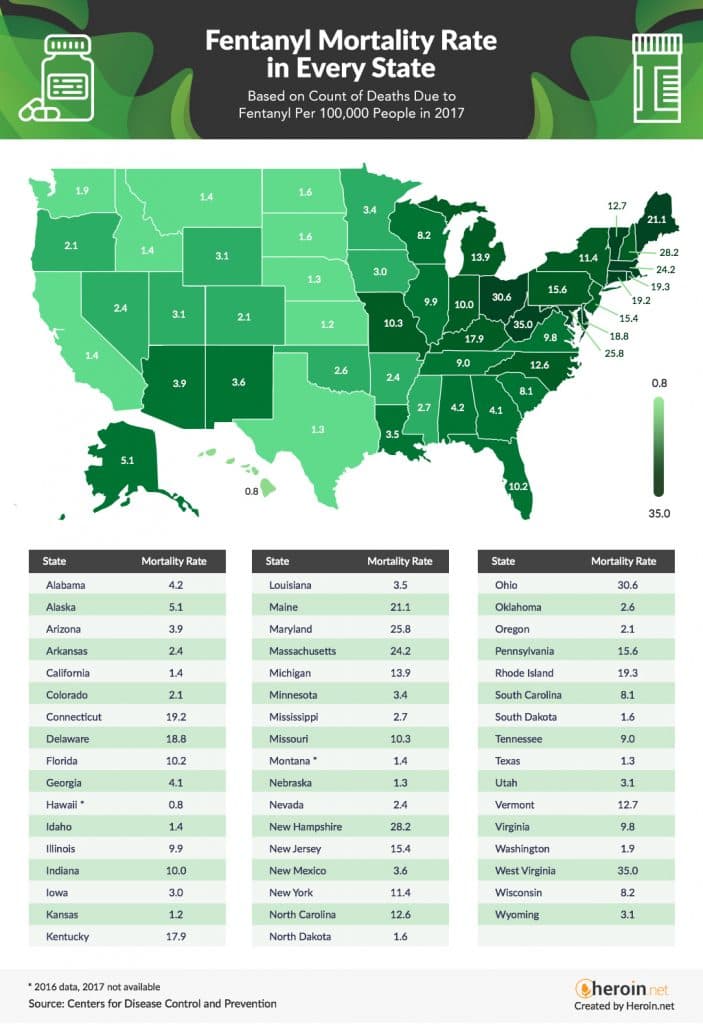 First, we looked at the fentanyl mortality rate in each U.S. state, which is represented as the number of deaths in 2017 per 100,000 people. Our results show marked regional trends, as shown on the map above. States on the eastern side of the nation tend to have a higher mortality rate associated with the substance than those in the western area. The three states with the highest rate are West Virginia (35.0), Ohio (30.6), and New Hampshire (28.2). Those with the lowest are Hawaii (0.8), Kansas (1.2), and Nebraska (1.3).

Percent Change in Fentanyl Mortality Rate in Every State 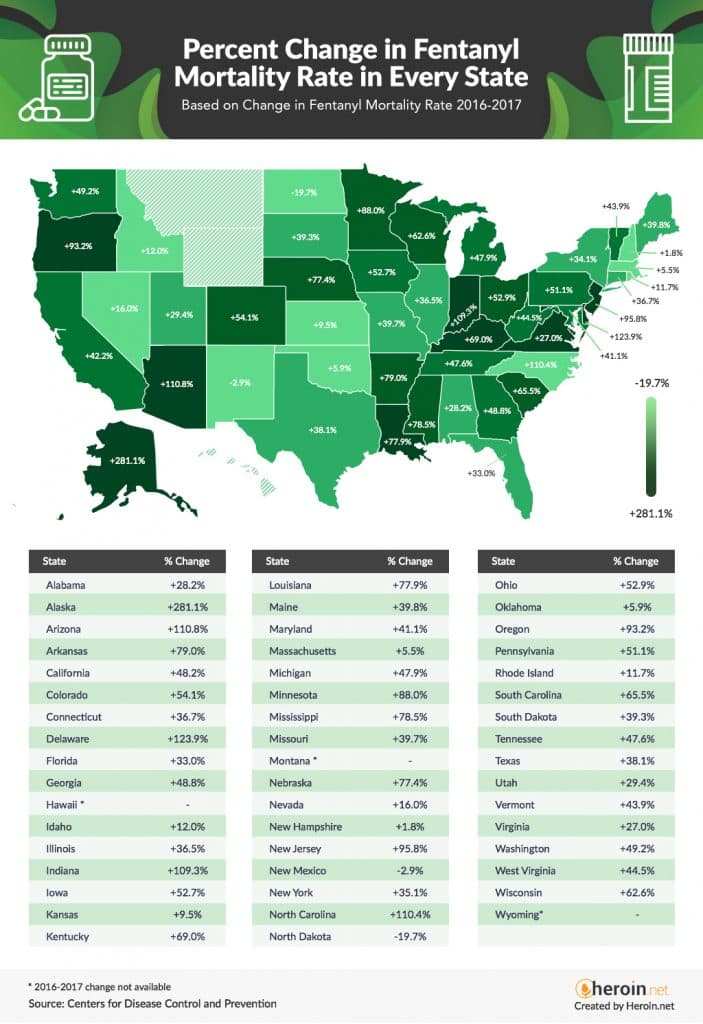 Next, we looked at the year-over-year change in mortality rate for each state (2016-2017). This shows us generally where the problem of fentanyl abuse is growing the most over time. Our results show almost no regional trends, as shown on the map graphic above, with the rates of increase varying widely across neighboring states. The three with the highest rate of increase are Alaska (281.1%), Delaware (123.9%), and Arizona (110.8%). Those with the lowest are North Dakota (-19.7%), New Mexico (-2.9%), and New Hampshire (1.8%).

Fentanyl Deaths Across the United States 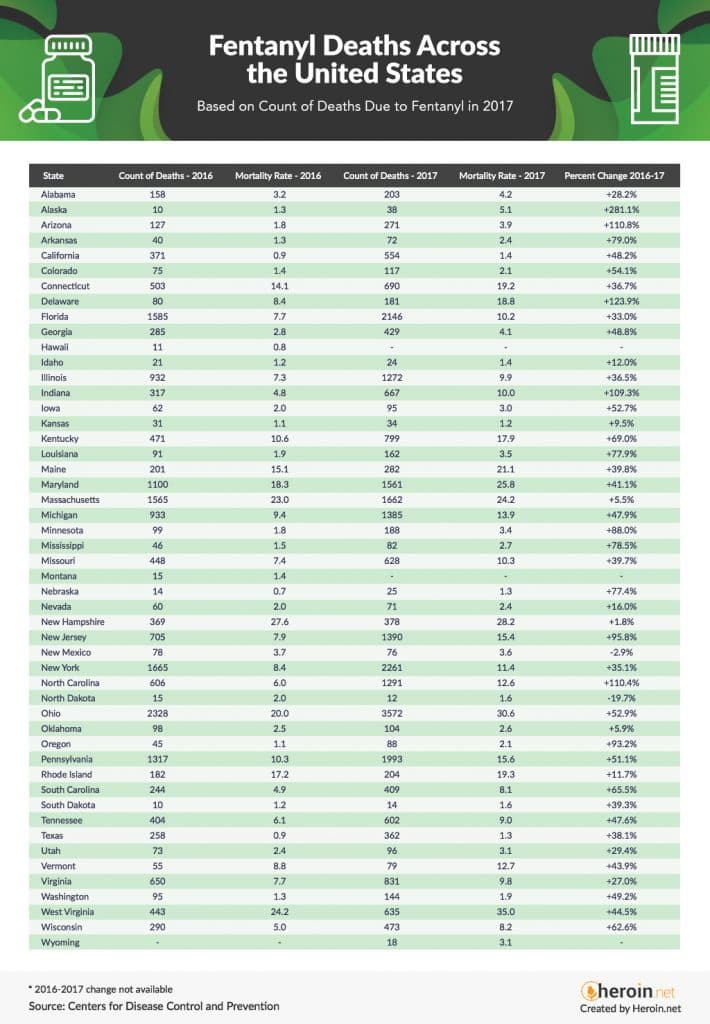 We also wanted to show all of the figures for 2016 and 2017 for each U.S. state, including the number of deaths, mortality rate, and year-over-year increase in mortality. It’s apparent from these numbers that even if a state has a relatively low mortality rate, it still has lost a considerable number of community members to this deadly substance: fentanyl. In Ohio, for example, nearly 10 people are lost each day as a result of this drug. 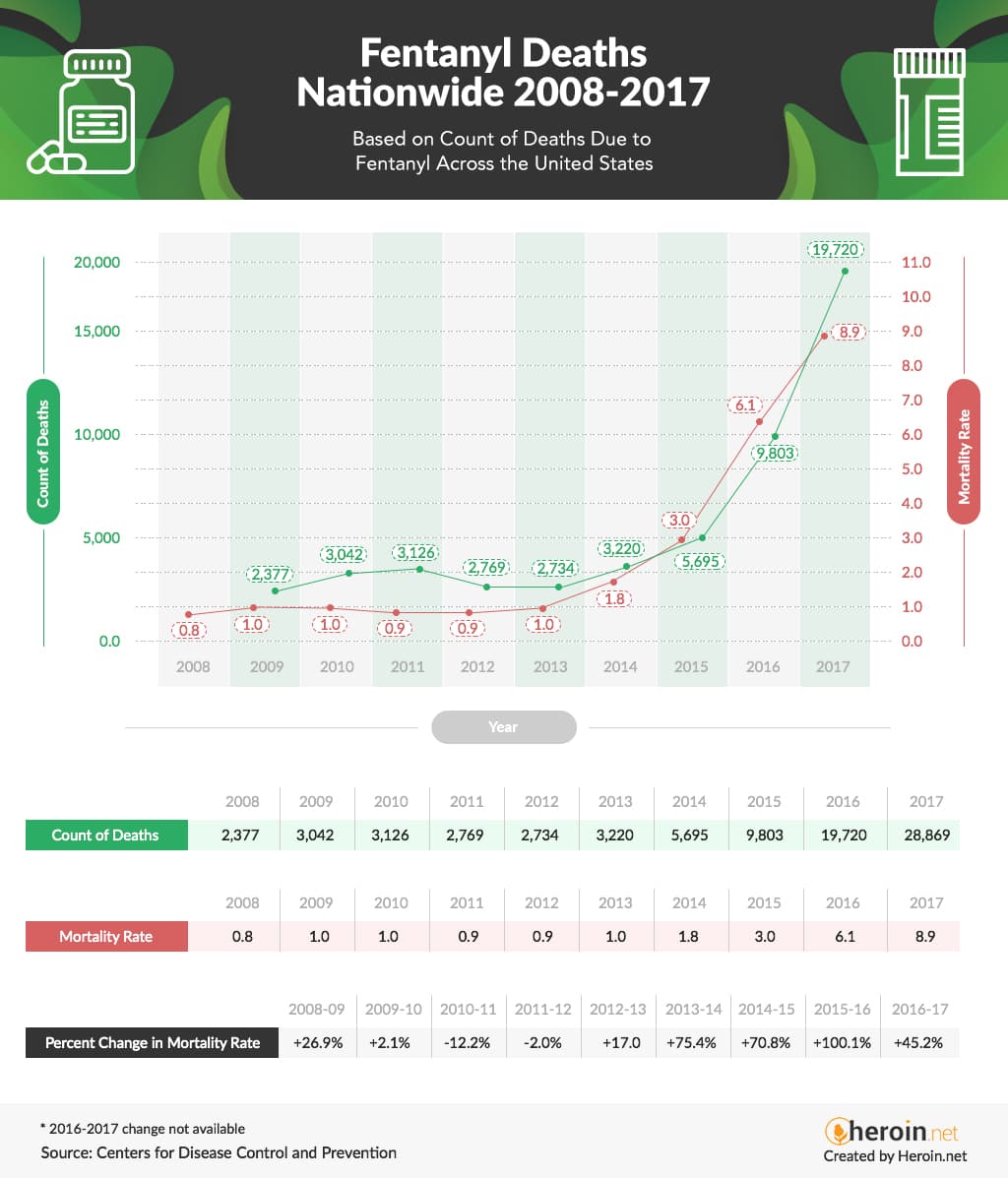 Just like heroin and prescription painkiller abuse, the diversion and non-medical misuse of fentanyl presents serious health risks to users and puts their life in danger. If you or a loved one is struggling with a substance use disorder, learn more about how you can find help from one of our centers.

CAN I USE THIS INFORMATION?

The information and graphics in this blog post can be used and displayed by all commercial and non-commercial websites without charge. However, use is only permitted with proper attribution to Heroin.net. When using this information or any of these graphics, please include a backlink to this page.