As of 2014, 4.8 million Americans aged 12 or older report having used heroin at least once in their lifetime – a population that’s greater than the entire state of Louisiana. Over a third of Americans report feeling that heroin abuse in the United States is an extremely serious problem.

Widespread overprescribing, diversion, and abuse of prescription opioids – painkillers such as OxyContin and Vicodin that act on the body’s opioid receptors in a way similar to heroin – have led many habitual users of these drugs to turn to heroin when they could no longer acquire prescription painkillers. The transition from opioid medications to heroin has increasingly exposed suburban and middle- to upper-class Americans across the country to new risks, such as uncertain purity of heroin, a greater possibility of overdose, and the health dangers associated with injection drug use and needle sharing.

But just how much do people know about the true extent of the heroin epidemic both in America and around the world? We polled approximately 2,000 U.S. residents on topics such as heroin addiction, overdoses, and arrests to understand their perceptions of this dangerous drug and how closely these perceptions align with the reality of heroin abuse. Read on to learn more about Americans’ awareness of the heroin crisis. 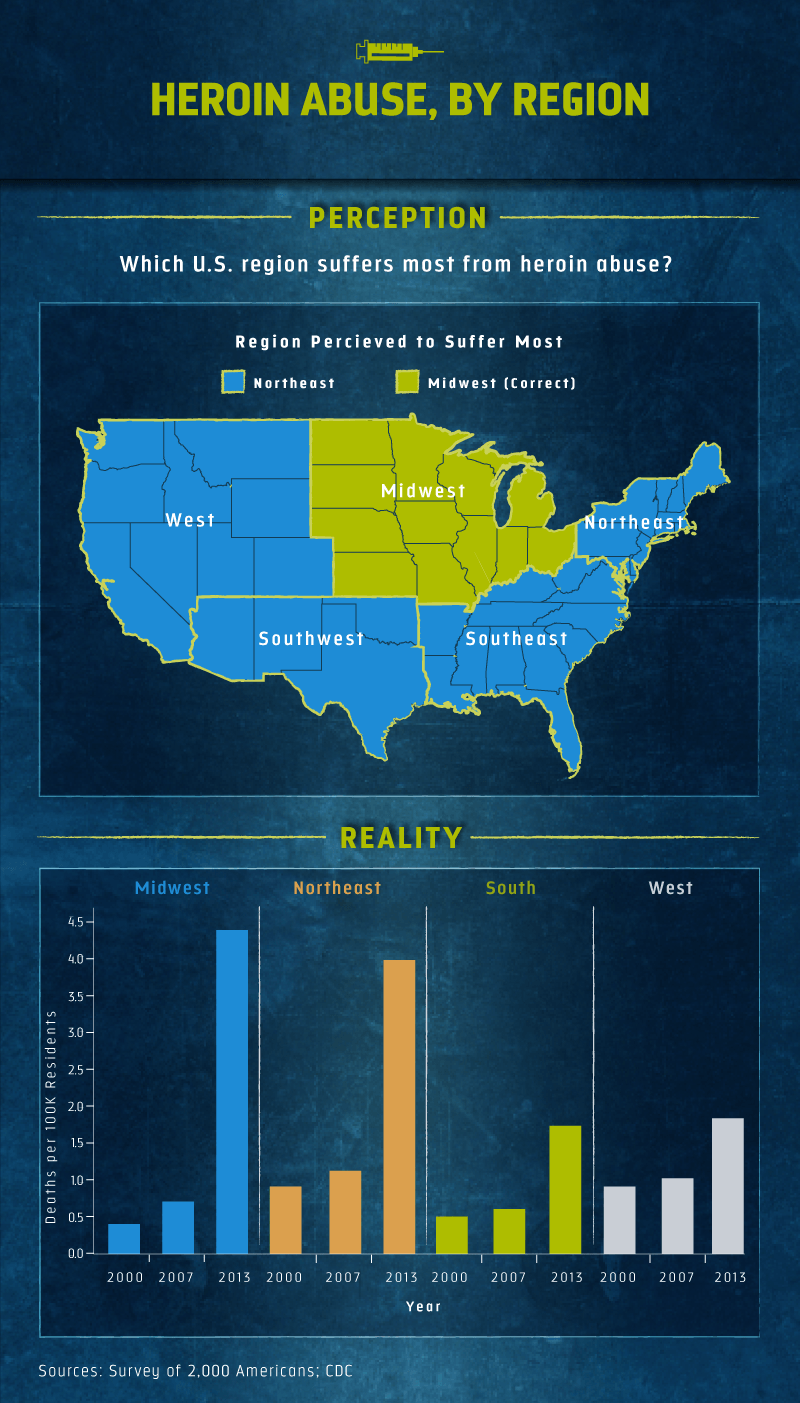 As heroin addiction has spread throughout the 2000s and 2010s to affect both large and small communities across the nation, certain regions have borne the brunt of this deadly epidemic – and received a great deal of media coverage as well. The Northeastern U.S., including states such as Vermont, New Hampshire, Pennsylvania, and New York, has frequently made headlines due to the extent of heroin trafficking and abuse in this region.

With Vermont Gov. Peter Shumlin noting that his state is in the grips of a “full-blown heroin crisis”, and Pennsylvania Gov. Tom Wolf calling for $34 million to be dedicated to treatment for heroin and opioid addiction, it’s easy to believe these states are suffering the worst of the epidemic. Most of our respondents thought that the Northeast was hit the hardest: Those from the West, Southwest, Southeast, and the Northeast itself stated that this area was the most affected by the heroin crisis, while only those in the Midwest believed that the Midwest was the most affected.

Indeed, the Midwest does slightly edge out the Northeast regarding the number of heroin-associated deaths per 100,000 residents. States such as Ohio, where at least 23 residents die of heroin-related causes weekly, are among the most affected by this epidemic of addiction. Ohio saw nearly 1,200 overdose-related deaths in 2014 that were connected to heroin use. Indiana cities have also seen a sharp rise in the number of cases of heroin overdoses, many of which have been fatal.

Tragically, Opana (oxymorphone) and heroin use and injection has also been linked to an outbreak of nearly 150 cases of HIV in the small Indiana town of Austin, a city of only 4,200. An increasing number of children in Indiana are now entering foster care as well, largely due to their parents’ use of heroin.

One trend, however, stands out as especially clear: Every region of the U.S. has seen a sharp increase in heroin-related deaths from 2000 through 2013. For those facing heroin or opioid addiction and seeking to quit these drugs, getting off heroin can be a matter of life or death. At Heroin.net, those struggling with substance use can find resources to help them understand the unique challenges of this addiction and locate treatment options that can meet their personal needs.

Perceptions of Heroin and Opioid Overdoses 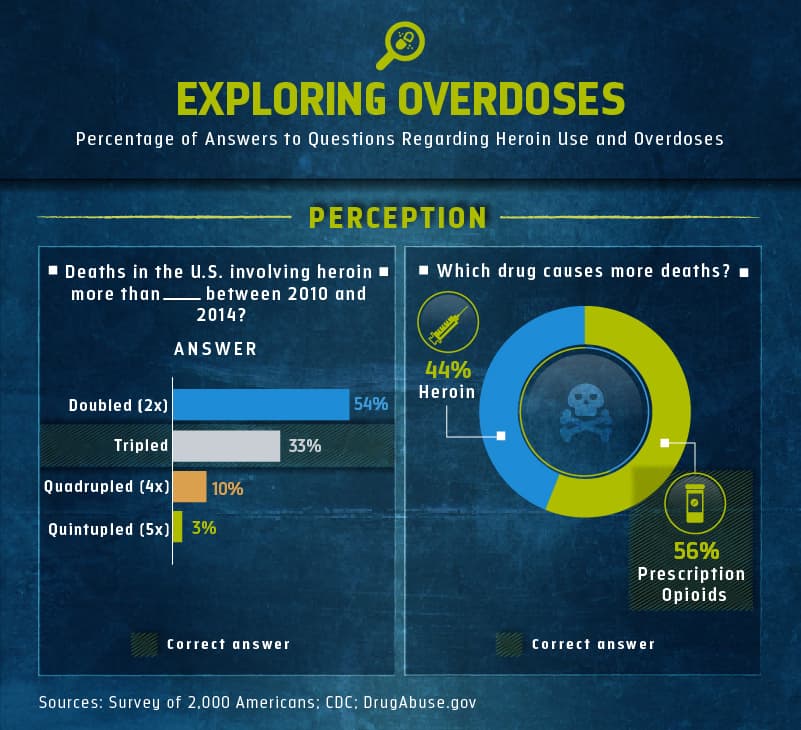 Next, we quizzed participants on the extent of heroin overdoses and deaths across the country. We asked them how much these deaths have risen from 2010 to 2014. 33% correctly stated that heroin overdose deaths had tripled over these years.

Why do so many people find it readily believable that there would be such an explosion in heroin use across the country in recent years? By now, the public has had ample time to become aware of the shocking extent of the heroin epidemic. Google trends reveal a sharp spike in public interest and news coverage surrounding the keyword “heroin” in February 2014, when Vermont Gov. Peter Shumlin devoted his entire State of the State address to the region’s heroin and opioid crisis. Altogether, public interest in heroin has steadily risen over the past several years according to Google trends data, while searches for opioid painkiller keywords such as OxyContin, Percocet, Vicodin, and “painkiller” have remained steady or declined. These figures represent how visible the heroin issue is despite its often disguised prevalence. Almost every county has seen a rise in drug overdose deaths, with deaths now occurring at a rate that’s been compared with the peak of the HIV epidemic.

We also asked participants whether heroin or prescription opioids were responsible for causing a greater number of drug overdose deaths. While 56% believed that prescription opioids were the foremost cause of these deaths, 44% felt that heroin was the biggest cause. As of 2014, the number of deaths per 100,000 people attributed to heroin overdose continues to rise, and it now approaches the rate of deaths associated with opioid painkiller overdose.
Both men and women have been affected by this rise. Heroin was previously most prominently used among men in past decades; however, increasing numbers of women are now abusing the drug as well.

Global Patterns in Abuse of Heroin 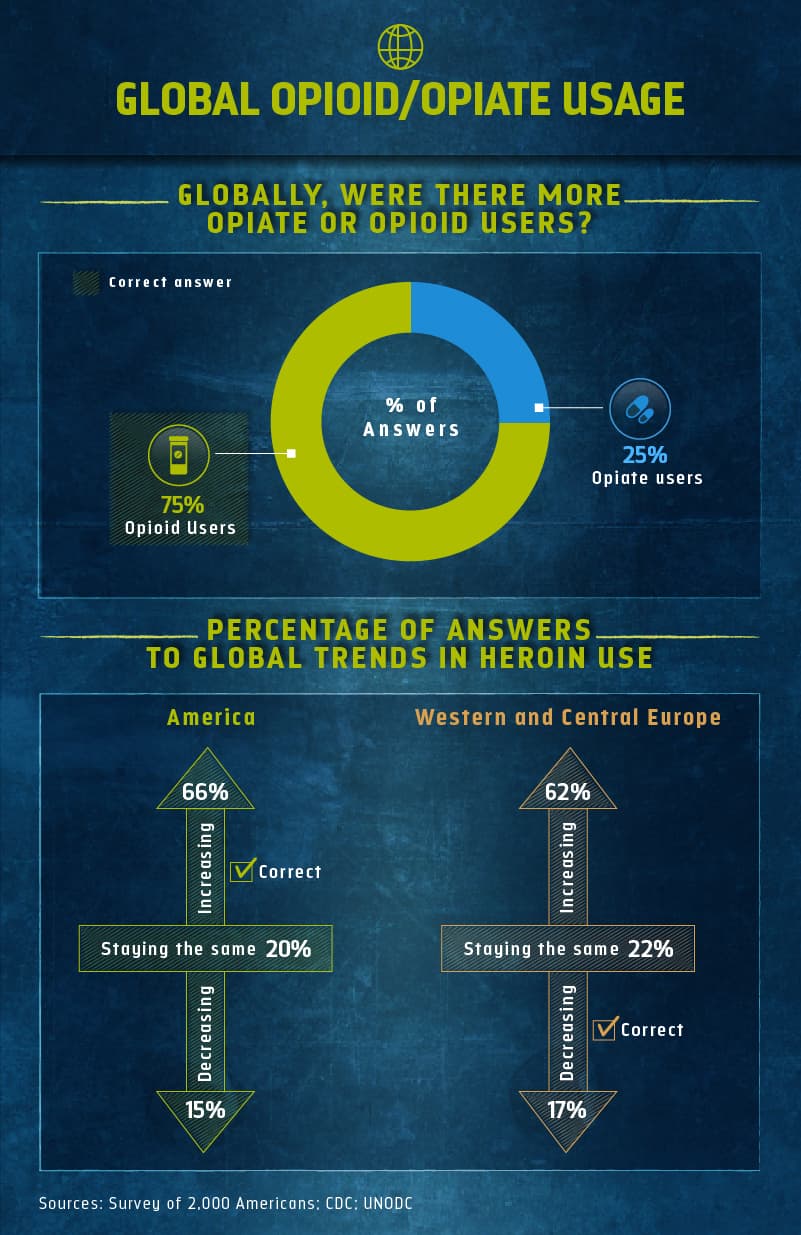 Heroin use and prescription opioid abuse are related phenomena: These substances can each fulfill the same physical addiction, and users of one may transition to the other if necessary. Globally, use of opiates such as heroin, morphine, and opium as well as synthetic opioids such as OxyContin, Vicodin, and Opana remain serious and widespread problems. We asked our survey participants whether there were more opiate drug users or prescription opioid users globally, and found that 75% believed – correctly – that there are more opioid users around the world.

We also inquired about trends in heroin use over time in different regions and found a similar response distribution for both America and Western/Central Europe. 66% of our respondents stated – correctly – that heroin use was on the rise in America, compared with 62% who believed – incorrectly – it was increasing in Europe. The United Nations Office on Drugs and Crime has reported that since 2007, heroin use among Americans has grown by 145%, with heroin-associated deaths growing fivefold since 2000 as well. Meanwhile in Europe, cases of heroin abuse have declined between 2008 and 2014 in nearly every country that tracks these figures. 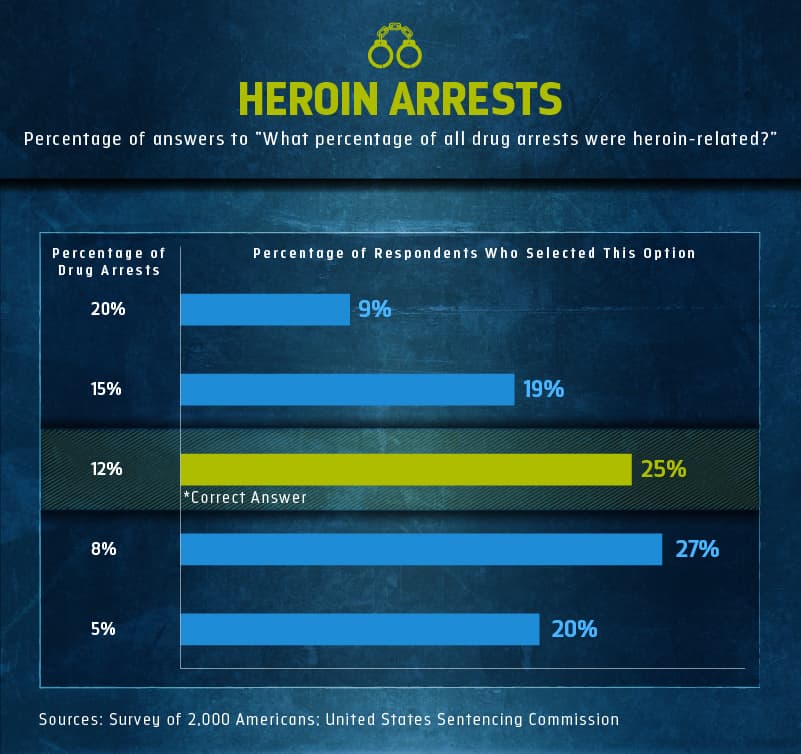 One possible cause behind this persistent underestimation is varying perception of where drug abuse takes place and where it presents the most severe problem. Polls have found that 87% of respondents view drug abuse as a serious problem or even a crisis on the national level – yet when asked if drug abuse is an issue in their neighborhood, 47% reported that it was not a problem or was only a minor problem. It is possible that much of the public thinks of drug-related crime as a distant phenomenon that happens elsewhere in the nation, rather than in the immediate vicinity of their own neighborhood.

While heroin use has historically been subject to substantial law enforcement action, the resurgence of heroin abuse and overdose in the U.S. in recent years has made use and trafficking of the drug a renewed priority and a high-profile target for anti-drug efforts.

As of 2016, the president has called for $1.1 billion in new funds to address both the heroin and opioid epidemics, and recent headlines now feature frequent busts of both large and small quantities of heroin, particularly in the Northeastern region.

Finding Help for Heroin Use and Addiction

Our survey results make clear that the public perception of the heroin crisis is underrated. Heroin is one of the most addictive illicit drugs, producing a chemical dependency that’s fueled its rapid spread across the United States. It’s important that the public remains diligent in understanding the impact and danger of heroin and its negative force on communities. Heroin use continues to climb, affecting individuals and cities at large.

If you or someone you know is struggling with addiction to heroin, it’s crucial to seek qualified help. At Heroin.net, we offer referrals to treatment programs and facilities that specialize in heroin and opioid addiction. With modern treatment under the care of qualified medical professionals, you or your loved one can fight heroin addiction and prevail over substance use. Visit Heroin.net or call 1-888-496-8059 Who Answers? today to find the help you need in the battle against substance abuse.

We surveyed 2,000 United States residents on various questions regarding heroin abuse to gauge their awareness of different aspects of this issue; we then compared respondents’ answers with known, authoritative figures on these topics.