If you have spent any significant time in Appalachia, you may very well know someone, or have heard of someone who has been impacted by opiate abuse. Opiates came into prevalence in this area at the turn of the 21st century, when OxyContin (a time-release version of oxycodone) grew from $48 million in sales in 1996, to almost $1.1 billion in 2000. Four years to a billion dollars in sales in extremely fast by any measure, but the real reason for its popularity became obvious when in 2004 OxyContin became the most abused drug in the United States. Oxy may have kicked off the epidemic, but opiate abuse spread to a variety of drugs including methadone, hydrocodone, codeine, morphine, and heroin. No area knows this better than the Appalachian states, where opiates ruin more lives than anywhere else.

The appalachian region has had a long and troublesome relationship with the coal industry that drew much of the original population to the area. In short, with the nation relying less upon coal for energy, the once thriving communities full of well-paying coal jobs suffered and anyone with the capital means or promotable education left for better opportunity. The result was crippling poverty and lack of education in the mountain regions that still exists to this day.

Where hope has left the region, addicting opiates have entered. This is particularly true for the states of West Virginia and Kentucky, who experience the highest rates of opiate related deaths in Appalachia. Following the population-adjusted death trends since 1999, it becomes readily apparent how quickly and significantly opiates infiltrated these states. 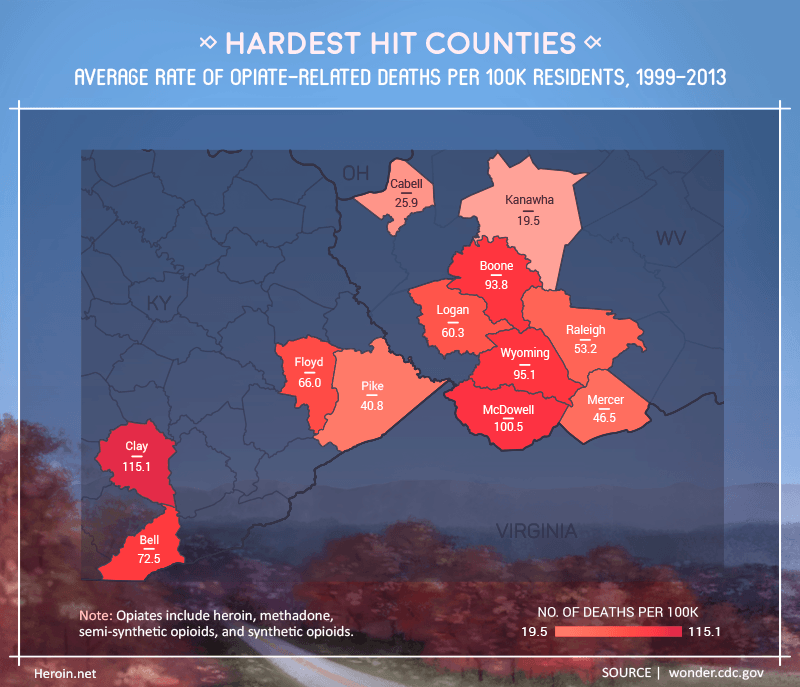 A closer look reveals the hardest-hit counties, where death rates have soared. These counties have several unifying demographic factors that play a role in drug abuse. Clay County, KY and McDowell County, WV for example have about half the national median household income while twice as many people live below the poverty level. College educations are dramatically lower than the national average in the most affected counties, and in room full of 100 people about 40 won’t possess even a high school level education. 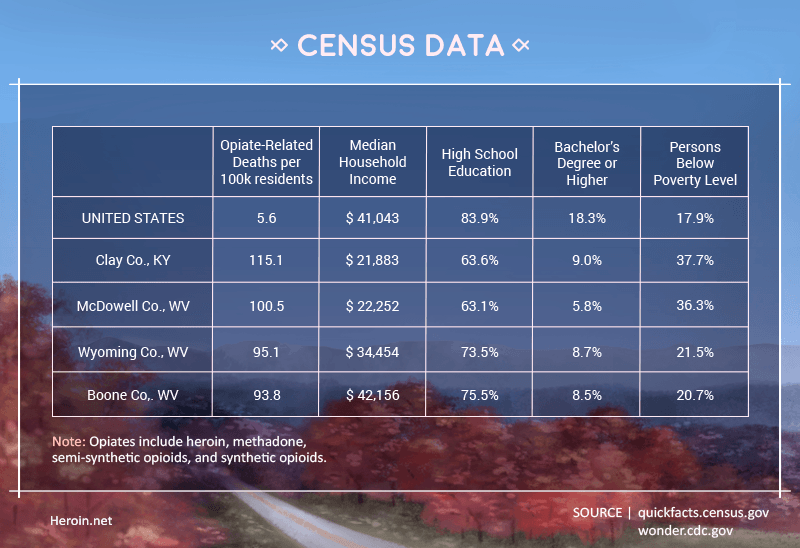 Deaths from opiate abuse are inversely related to income and education. In other words, the poorer and less educated you are, the more likely you are to die from opiates. This is bad news for many residents along the Appalachian Mountains, where the socio-economic and education status of its residents is often well below the national average. 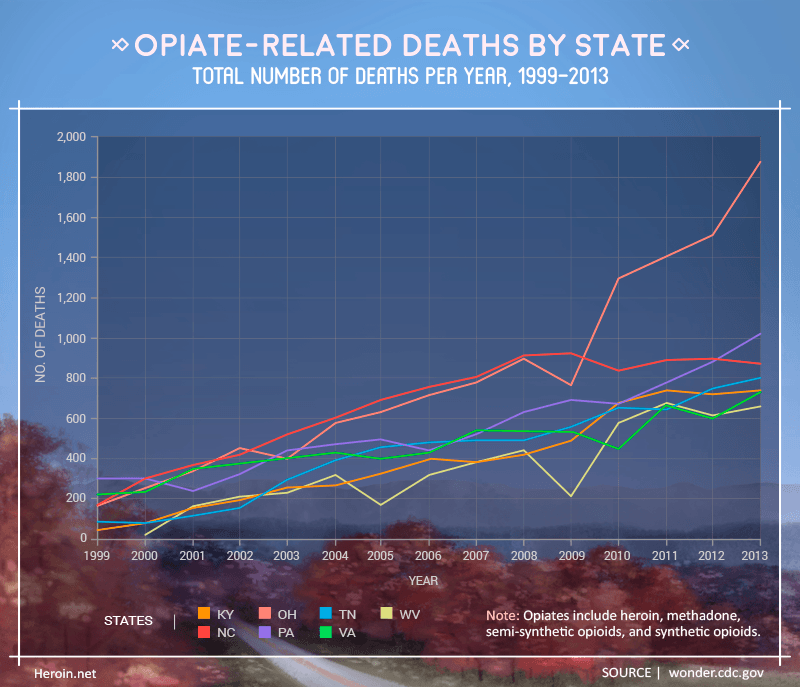 Graphing opiate deaths over time shows that states have struggled to slow and contain devastation. When comparing changes, pay attention to how each state ranks relative to the others, in order to spot significant differences in growth rates. Key examples include Ohio’s recent explosive growth in death rates as well as North Carolina’s recent decline.

The Ohio Department of Alcohol and Drug Addiction Services released a document in 2012 highlighting the epidemic of opiate related overdoses. They claim that 4 Ohioans die every day from drug overdose, and that increasingly more people are moving from prescription painkillers to heroin in order to more cheaply satisfy their addiction. This dangerous pattern is popping up in other states too, especially in the northeast.

North Carolina is the only one of these states that has been able to significantly curb the rising death rates. In 2008 they rolled out an initiative known as Project Lazarus in Wilkes County, a place which at the time was an outlier with unusually high rates of opiate related deaths. The program involved changing the way clinical professionals and residents were educated about and treated for opioid addiction, and it worked. In addition they provided free naloxone, which is used to reverse the effects of opioid and heroin overdoses. The results were so promising that the program was rolled out statewide and has managed to level out and reduce overdose death. 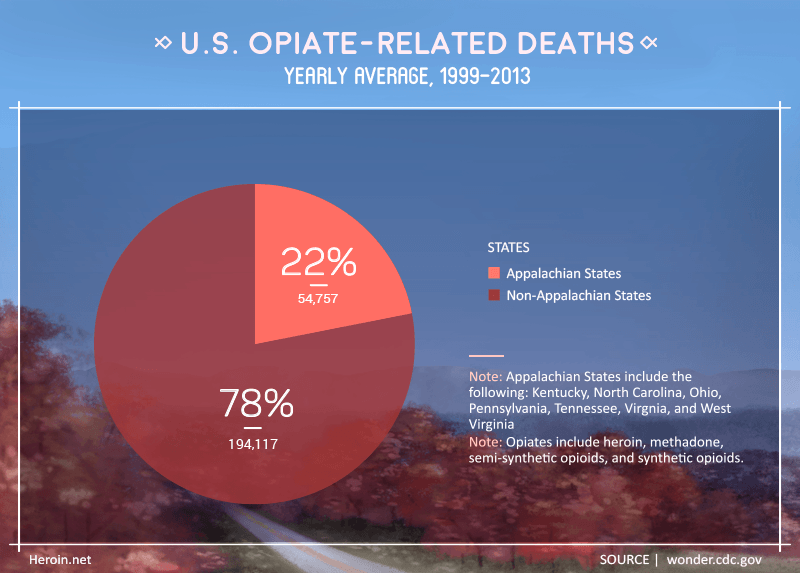 The states that make up the Appalachian region have accounted for 22% of the nation’s opiate related deaths between 1999-2013, despite representing only 20% of the US population in 2013. Based on these numbers we can determine the death rate to be 10% higher per capita in these areas than the rest of the nation. 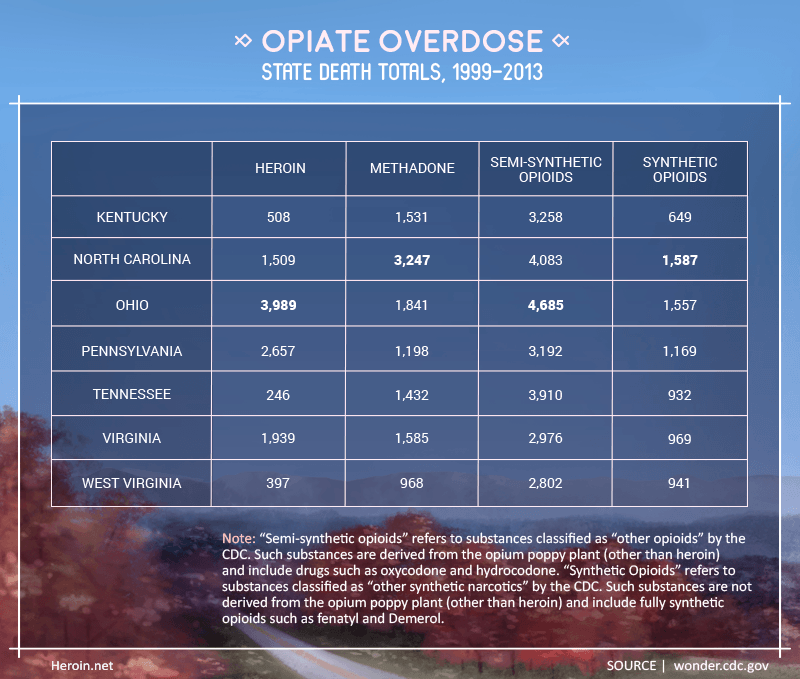 Heroin and methadone are two substances which have received tremendous national attention due to their use causing an increasingly significant portion of overdose deaths. Because both of these drugs are opiates, they are often abused by those addicted to the opiate high. The death tolls for each are listed above, and serve as a sobering reminder of the scale of destruction they cause.

The Appalachian mountain area is among the most scenic regions in our great country. The overwhelming natural beauty in states along the majestic mountain chain is truly breathtaking. Unfortunately, what should be an geographical area of great national pride ends up all too often being the subject of horrifying stories of poverty and rampant drug abuse. Residents of Appalachia are in dire need of effective outreach and treatment programs if there is any hope of stopping the epidemic of opiate abuse and restoring this area to its original glory.

Opiate addiction is certainly not a new phenomenon, but has taken novel shape in more recent years due to the seemingly ubiquitous availability and popularity of prescription painkillers. Complicating the issue is the fact that the good intentioned attempts to curb rampant prescription abuse may be inadvertently driving people towards heroin and other strong opiates to satisfy their dependencies. The fact remains that any addiction to opiate substances (of all varieties) can be some of the most tenacious and complicated ones to overcome. Fortunately, there are resources available to assist with the recovery process. If you or someone you know is struggling under the weight of opiate addiction – to painkillers, heroin or otherwise – help is available. For more information about substance abuse treatment and other recovery resources, visit heroin.net; or call [phone-inline] to be placed in immediate contact with a treatment support specialist.

We looked at CDC Wonder multiple cause of death data from 1999-2013. We looked at states in the Appalachian region, namely Kentucky, North Carolina, Ohio, Pennsylvania, Tennessee, Virginia and West Virginia. We focused on opiates, namely heroin, methadone, other synthetic narcotics, and other opioids.

We grant permission to use the images found on this page freely. When doing so, we ask that you kindly attribute the creators by linking to heroin.net and this page so your readers can learn more about the project and its methodology.