A New Kind of Danger

Across the United States, a potent opiate is rising in prevalence. In 2015, 12 people in New Orleans died over the course of a year from the drug– by 2016, the same city witnessed 8 deaths in just one month from the opiate. The drug, known as Fentanyl, is quickly becoming a household name and it’s clear that the exploding rates of abuse are not on track to slow down without serious intervention.

Fentanyl demands attention for the nation-wide reach of its harmful effects — only two states did not experience a fentanyl-related overdose in 2014. The drug is also devastating communities at a local level – just type “fentanyl overdose” into Google to see countless articles related to the struggles of fentanyl users and the impact of the drug on their families and neighborhoods.

To address this epidemic, the public needs a better understanding of the dangers of fentanyl and the sweeping effects of the drug within the past decade. Read on for an in-depth look at fentanyl by the numbers.

One Drug, All the Power 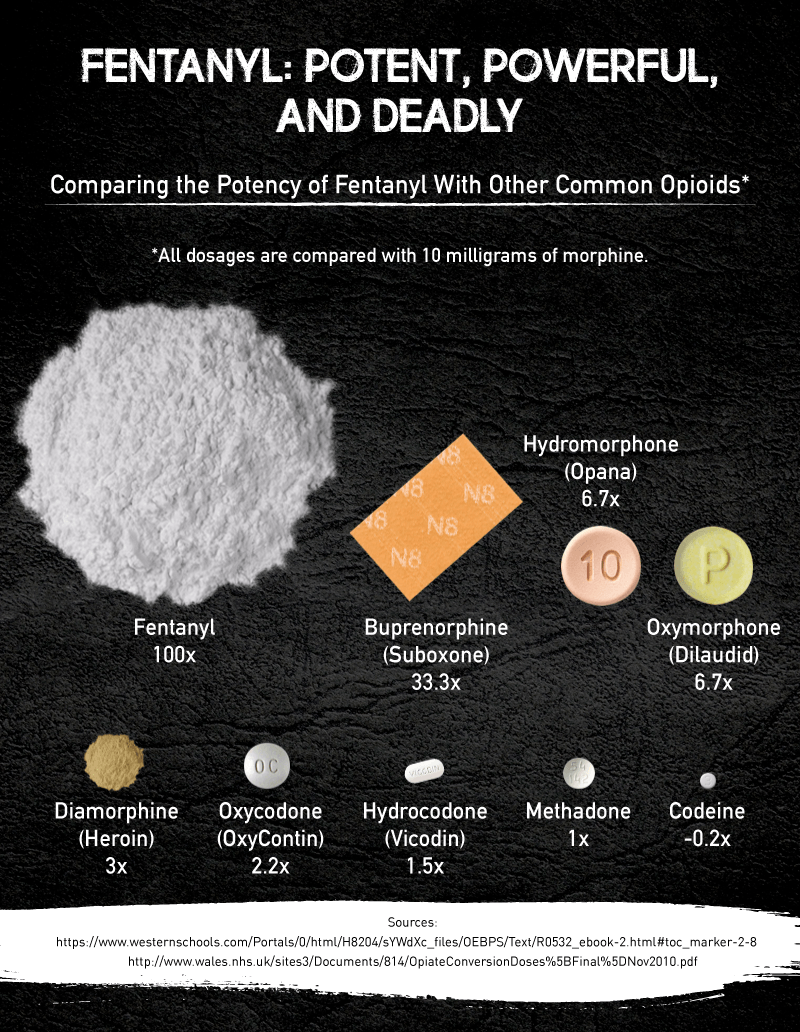 Opioids are substances that alter the way the brain perceives pain, but they can also provide an intense sense of euphoria and well-being. When it comes to opioids, the benchmark that all other substances are judged against is morphine. Heroin, typically both cheaper and more accessible than morphine, was long thought to be one of the deadliest addictive opioids available (it is three times stronger than morphine).

The number of overdoses involving fentanyl and synthetic narcotics rose dramatically from 1999 to 2014. While there were once isolated pockets of unaffected states, these havens no longer remain. Places like Ohio, Massachusetts, California, Texas, and Florida have seen a large amount of synthetic narcotic overdoses over the years. In response, these states have taken new measures to combat the rise in fentanyl use in their borders. In 2015, Massachusetts made trafficking fentanyl a crime. In Ohio, lawmakers are working to enact tougher penalties to restrict fentanyl sales, and make it easier to establish opiate treatment centers. These efforts may save lives and reduce the far reaching impact of this fatal drug.

King of the Block 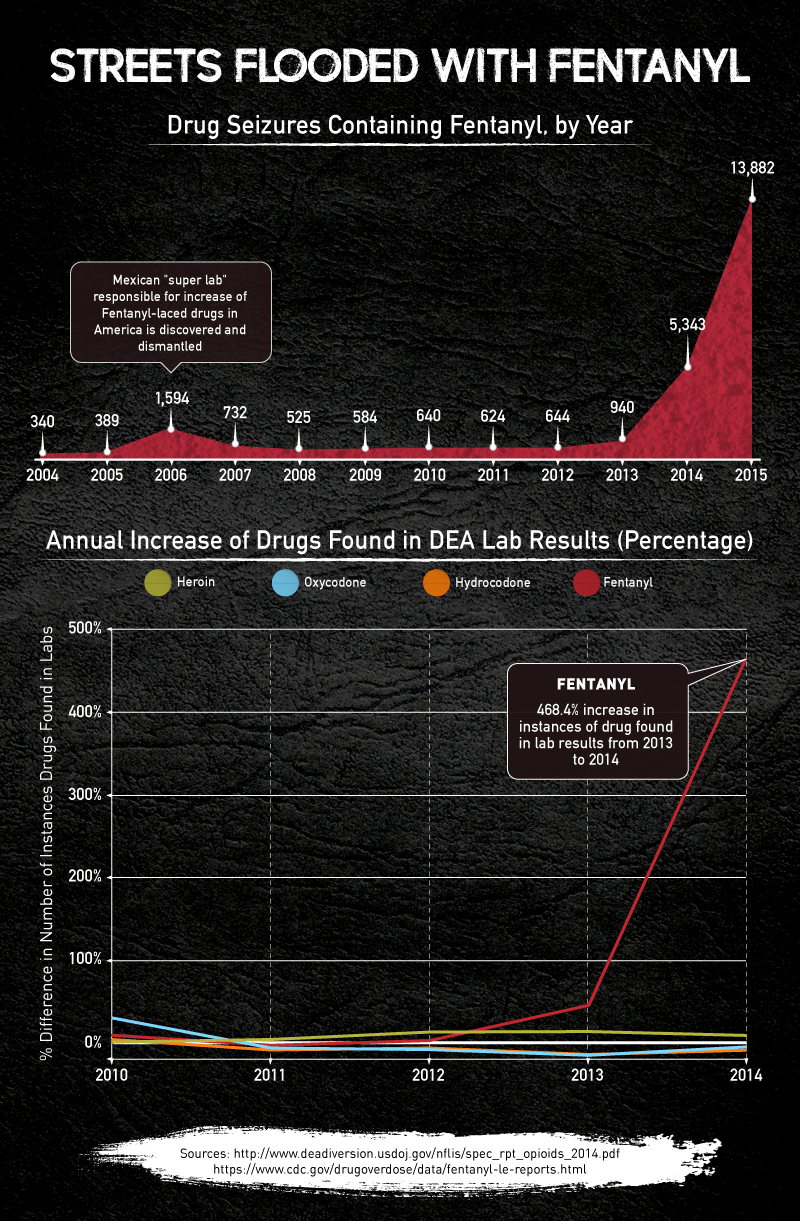 The growth of fentanyl is especially apparent when we explore drug seizures. Indeed, recently Fentanyl has come to own the streets. In 2011, there were less than 700 instances where seized drugs contained fentanyl, according to the Drug Enforcement Administration (DEA). That number increased more than 20 times from 2011 to 2015, when nearly 14,000 fentanyl seizures took place. Even more concerning, there was nearly a 470 percent increase in instances of synthetic drugs found in DEA lab results from 2013 to 2014.

Seized by the State 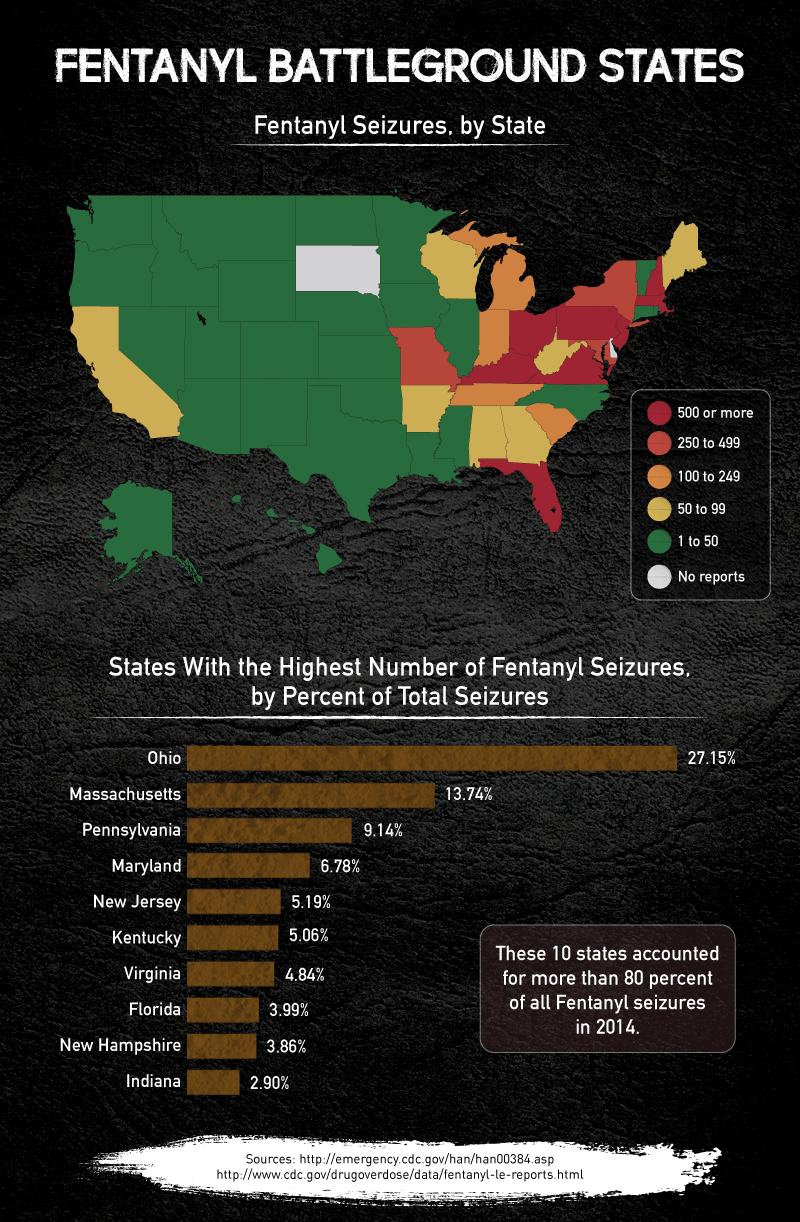 In the first three months of 2016, Cuyahoga County, Ohio, saw an average of 30 deaths a month related to fentanyl or fentanyl-and-heroin combination overdoses. Law enforcement in the Ohio area is acutely aware of the problem and working diligently to combat the devastating effects of this drug. 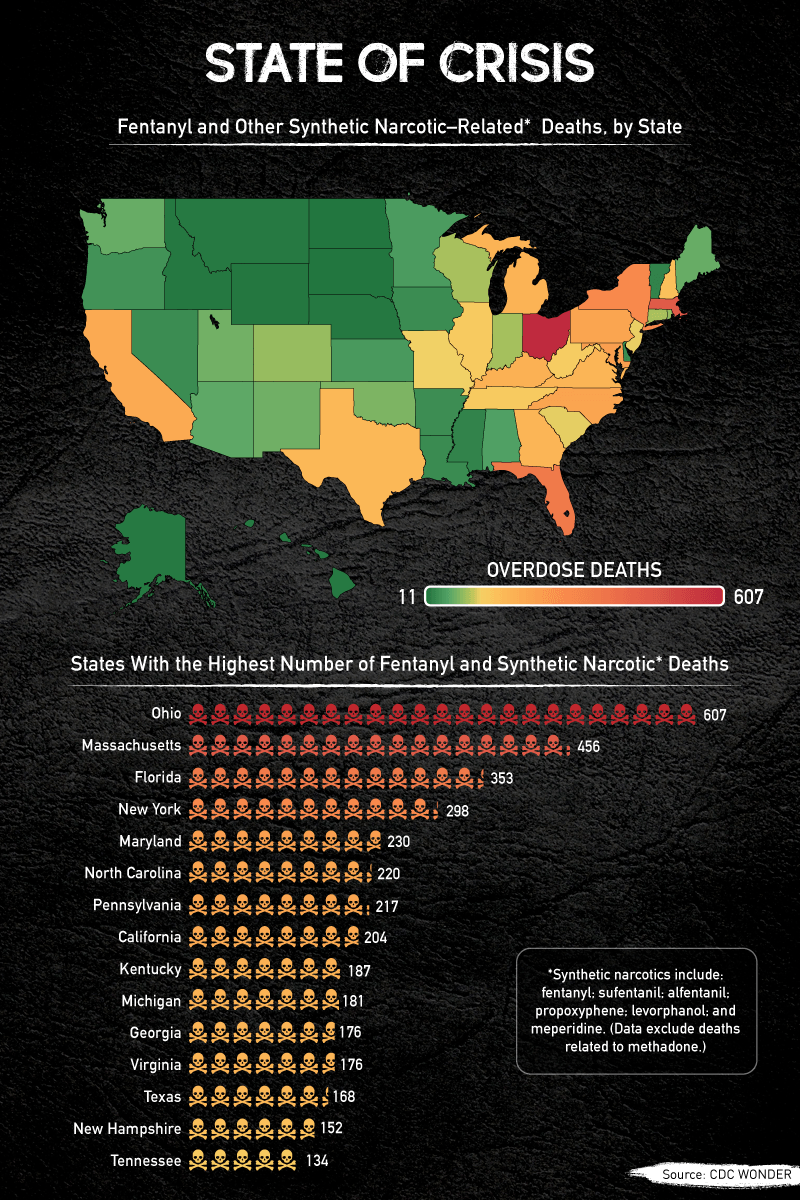 Due to its high potency, fentanyl doesn’t require a large dose to be lethal (in fact, micrograms of fentanyl can be lethal, rather than milligrams of other opioids). Though the CDC doesn’t break down deaths by particular narcotics, it has concluded that the number of deaths related to synthetic opioids (such as fentanyl and nonpharmaceutical fentanyl) nearly doubled from 2013 to 2014.

Florida, one of the top three states struggling with fentanyl and synthetic narcotic deaths, has witnessed a startling number of incidents concerning fentanyl-related deaths including one story of a 22-year-old whose dealer mixed heroin and fentanyl. Indeed, more than 350 Florida families have lost someone due to a synthetic narcotic–related death. 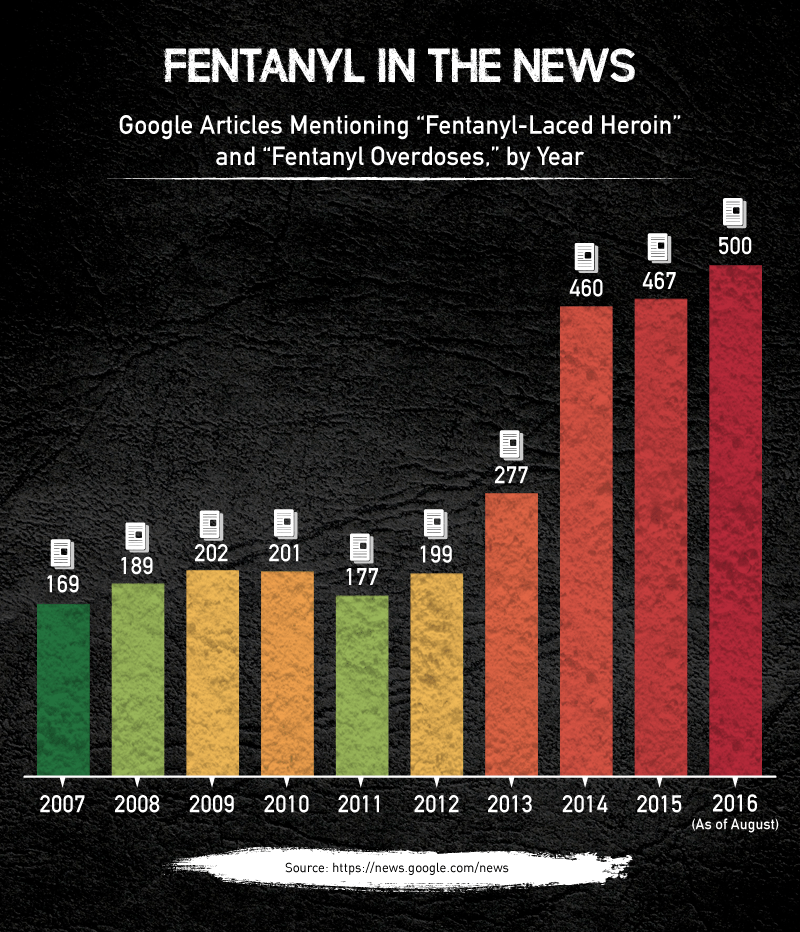 To understand the reach of fentanyl in 2016, we explored the prevalence of fentanyl mentions in the media. 2013 to 2014 saw the sharpest rise in attention, but the amount of coverage on the topic continues to climb in 2016. Fentanyl news stories run the gamut, from outlining the problem and reintroducing the reader to the dangers of fentanyl, to talking about recent efforts from local and state law enforcement to stop the flow of it onto their streets, to sharing the stories of families and loved ones suffering from the aftermath of an overdose. But as the deaths are increasing, so too are the number of articles chronicling the growing problem.

From Bad to Terrifying 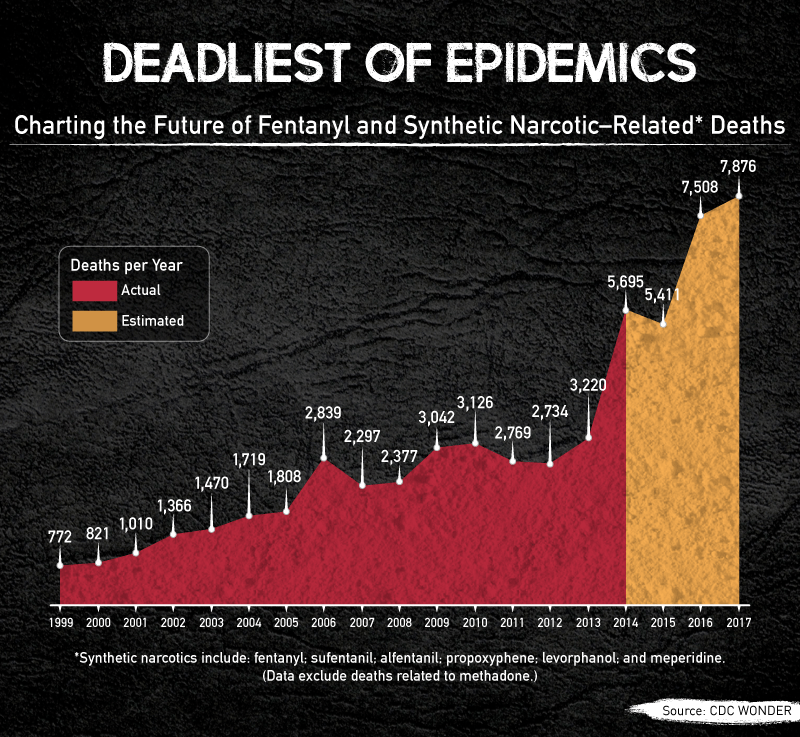 The number of deaths due to fentanyl and synthetic narcotic-related overdoses continues to grow. Most recent data reveals that the death toll from 2013 to 2014 rose an additional 2,500 people. In Massachusetts, opioids like fentanyl claim nearly four victims each day. Projections from the CDC are grim as well. Based on statistical trends, there could be over 7,500 deaths related to fentanyl and other synthetic opioids in 2016, and closer to 8,000 in 2017.

Despite Fentanyl’s prevalence across the United States, the drug only recently came into the spotlight when Prince, the legendary recording artist, passed away in 2016 from an apparent fentanyl overdose. Prince’s death sparked national conversation about fentanyl and other opiates and the dangers of overdose among those who are addicted.

Fentanyl has already claimed too many lives, such as that of Annabella Sagstetter, a 14-month-old toddler who ingested fentanyl-laced heroin at the house of her mother’s drug dealer. Only two out of the 50 states didn’t record a fentanyl-related death in 2014, and the epidemic is seriously impacting specific regions and states such as Ohio, where 30 percent of all fentanyl seizures have taken place.

If you, a loved one, or someone you know is struggling to cope with the challenges of addiction, get help. This isn’t a war you have to wage alone, and there is hope. Heroin.net can connect you with the best local drug addiction and treatment solutions today.

All data about deaths related to fentanyl and synthetic narcotics came from http://wonder.cdc.gov/.  Data regarding numbers of drug seizures came from the DEA’s National Forensic Laboratory Information System. For the number of related news articles per year, we pulled stories from https://news.google.com/news with the terms “fentanyl overdoses” and “fentanyl-laced heroin” and parsed the data by the date each article was published. All opioid potency data was compared with 10 milligrams of morphine.