The United States has a heroin problem. Now more than ever, we need to address this growing epidemic – yet all too often the spotlight seems to be turned toward stories that drive outrage but result in little real action.

Heroin use in the United States has been growing at an alarming rate in recent years. National mortality rates from opioid overdose are on the decline. The number of deaths attributed to heroin is spiking upward. Heroin is now responsible for more than half of all fatal opioid overdoses, according to the CDC. Despite the potentially fatal risks of heroin use, the number of new users more than doubled in the time period between 2006 and 2013 to a reported 169,000 people.

Twitter is incredibly effective in bringing together people with similar interests, opinions, and experiences. We found over 16,000 tweets from a recent 12-month period that mentioned heroin. This study examines the data to find out a bit more about who these people are and what they are saying about this deadly drug. 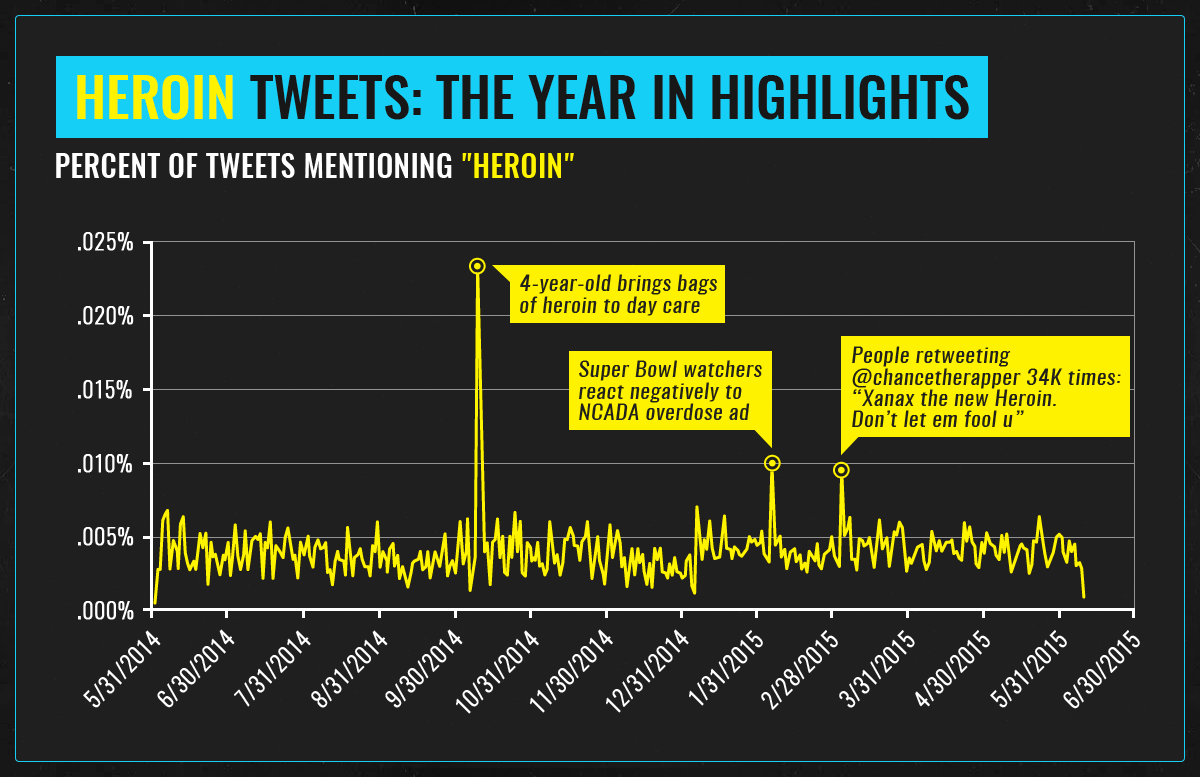 Twitter activity surrounding the term heroin highlights the drug for a variety of reasons. The most commonly featured handles are that of news organizations or other influential profiles who tweet about the drug. As a result, the content of those tweets often reflects the content of the related news articles. Much of the top content revolves around heroin-related statistics, social impact, and criminal cases.

The Super Bowl spike was the result of a bleak regional ad from the National Council on Alcoholism & Drug Abuse (NCADA). It only ran in the St. Louis area. The message was uncomfortable to many viewers and invoked comparisons to other ads. 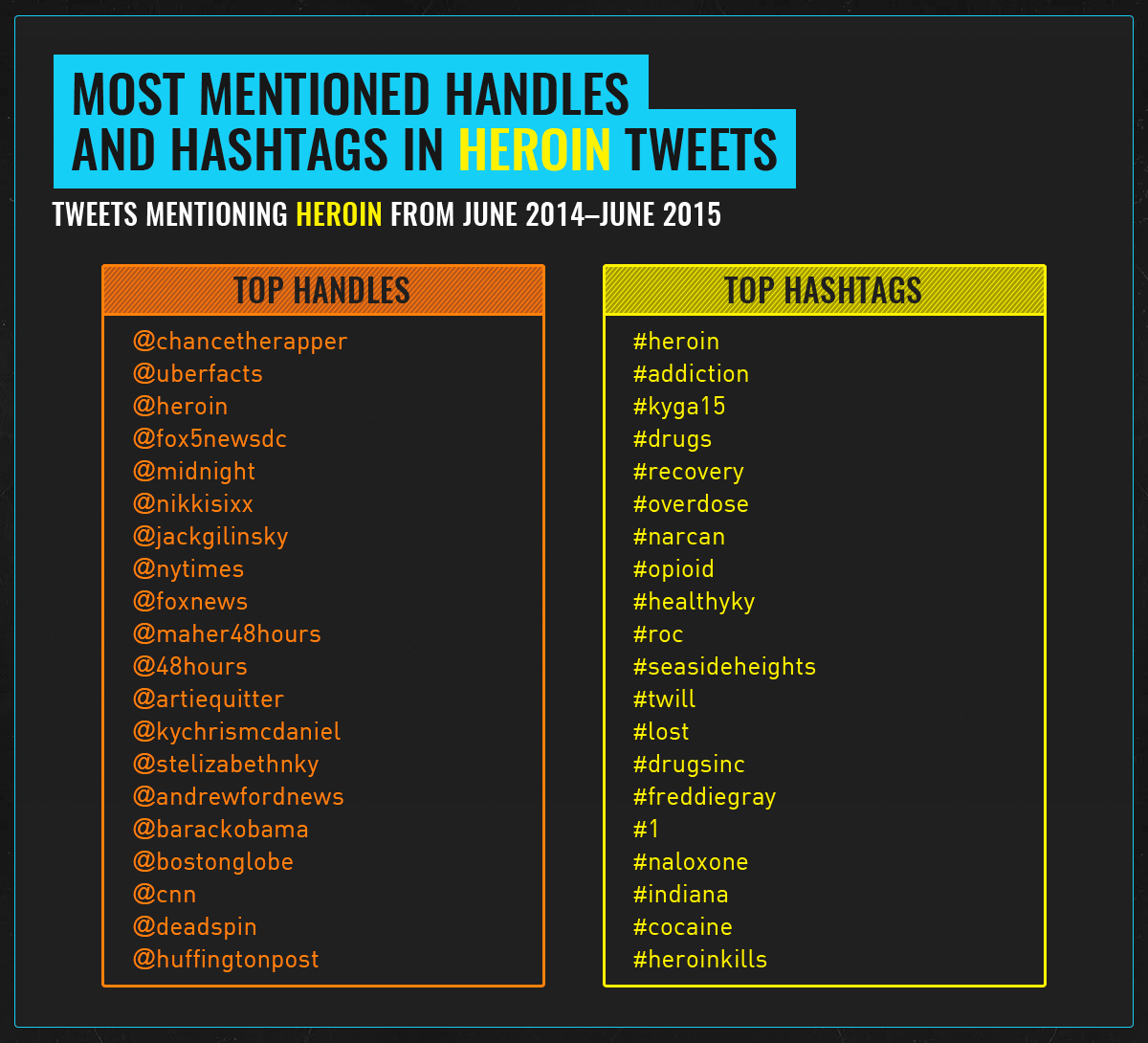 High-profile heroin-related news stories are the primary source of variation from the more obvious drug name hashtags. Two such examples involve the heroin overdose of the son of the mayor of Seaside Heights, New Jersey, and the toxicology report of the late Freddie Gray as indicated by the #seasideheights and #freddiegray hashtags. Reports on the growing trend of heroin abuse and the damage it causes can be frequently seen as well.

A recent tweet from the Harm Reduction Coalition calls attention to the rapid growth in the number of heroin deaths in the Seattle area.

‘The only word to describe the trend is â€œdistressingâ€’ – Heroin deaths spike by 58 percent in Seattle area http://t.co/r3ZKIQnx8G #overdose 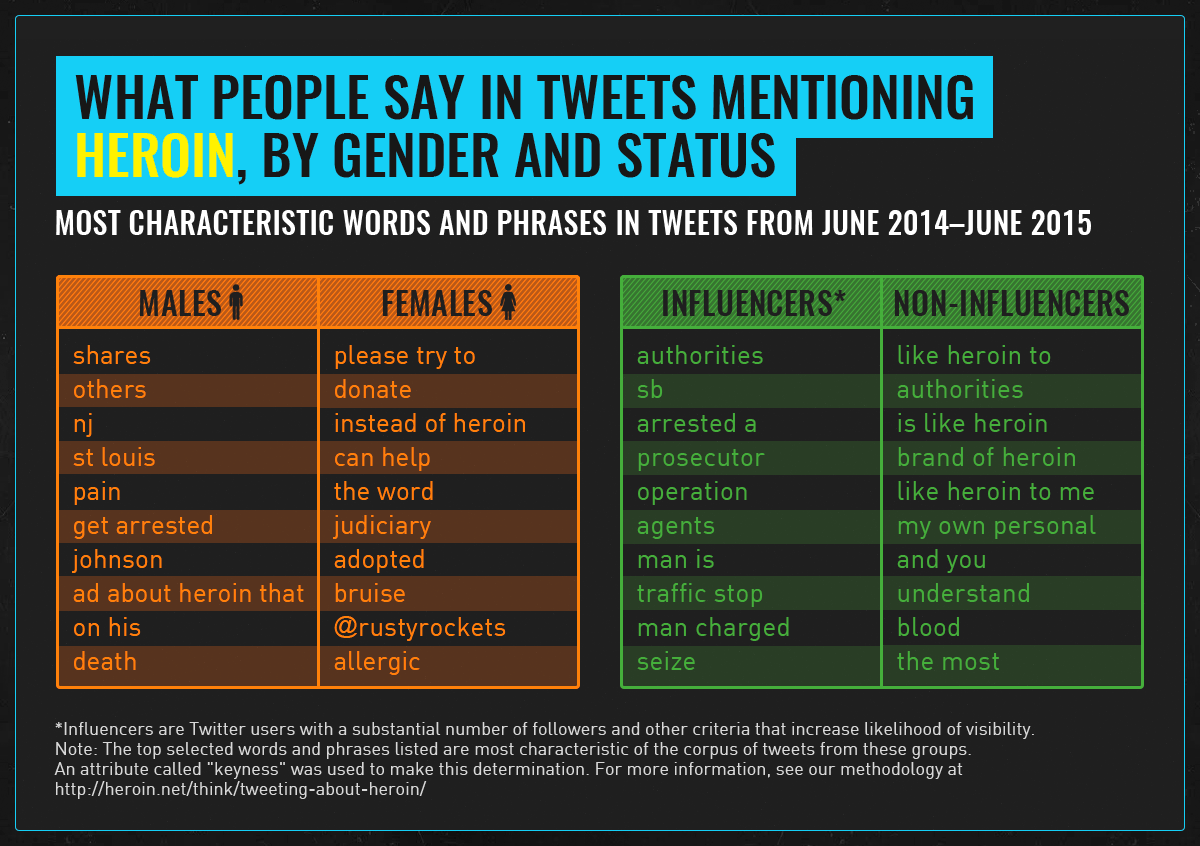 Our analysis found that people mention heroin on Twitter in a variety of contexts. Men speak more specifically to the effects of the drug, using words such as “pain” and “death,” while women focus more on the social impact. Phrases such as “please try to” and “can help” demonstrate a tendency to tweet about the need for effective rehabilitation services and the greater impact of drug abuse.

On the other end of the spectrum are the non-influencers who make up a majority of the Twitter population. Their tweets most often mention heroin in reference to lyrics or movie quotes. One common example is taken from the movie “Twilight” in which the main character Edward Cullen can be quoted as saying “But you, your scent, it’s like a drug to me. Like my own personal brand of heroin.”

Many heroin references in popular culture have historically either glamorized or downplayed the potentially devastating impact that such a drug can have on an individual, and on society at large. Those in the midst of a heroin addiction know that there’s very little to glamorize about it. If you or someone you know is struggling to overcome a heroin dependency, a substance abuse treatment program may be the answer – for more information about heroin recovery options, visit our state treatment directory, or call 1-888-496-8059 Who Answers? to immediately speak with a treatment support specialist. 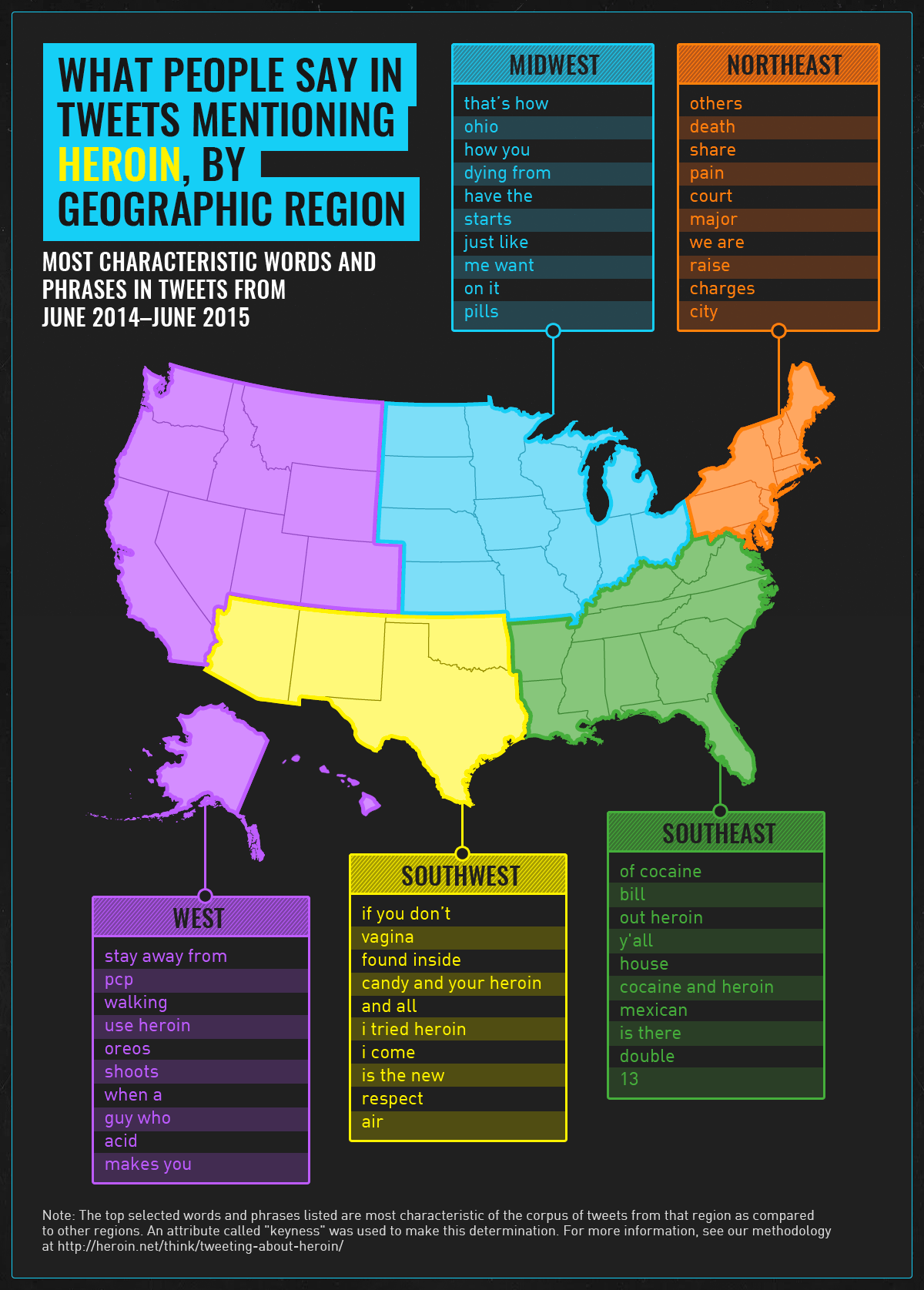 We also discovered regional differences in the usage of the term heroin in tweets. In the Northeast, tweets reflect the severe heroin problem in cities from Baltimore, MD to Portland, ME.

Some regions mention other drugs in relation to heroin. “Cocaine,” “PCP,” and “acid” all make frequent appearances. The effects of drug use are common mentions among most regions, with “death” and “dying” serving as two powerful examples.

Influences from pop culture are a recurring theme, like tweets comparing the addictiveness of Oreos to heroin and tweets of lyrics from Chance the Rapper. 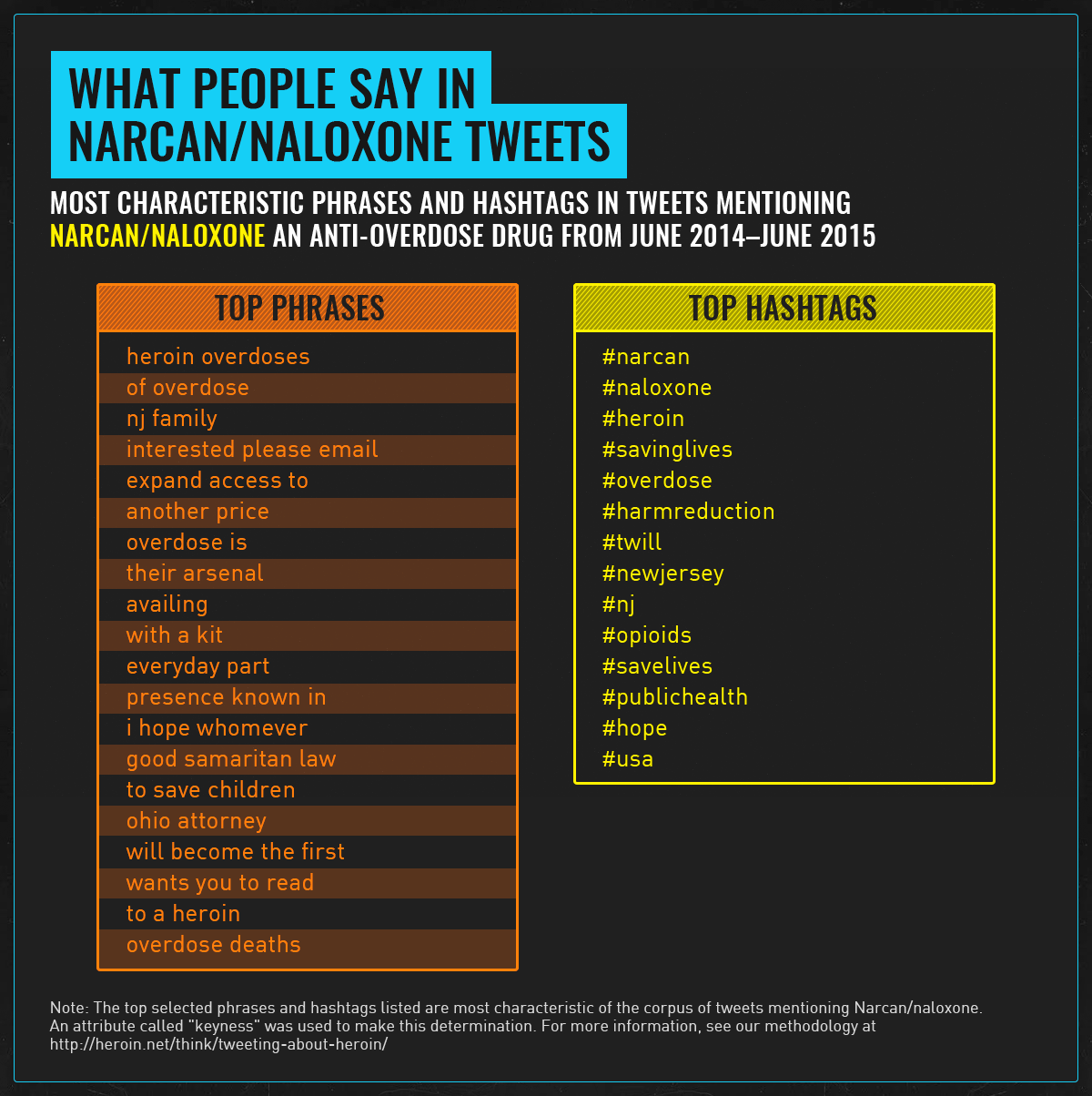 Naloxone (brand name Narcan) is a hot topic in the news, medical, drug, and recovery communities. This pharmaceutical drug is incredibly effective in reversing the effects of a heroin overdose. The miraculous capabilities of Naloxone are often described as being able to effectively “bring people back from the dead.” A significant amount of controversy surrounds the availability of the drug, with proponents lobbying for universal availability. In recent years, some cities have made the drug standard equipment for law enforcement and first responders.

The top phrases and hashtags we pulled from Twitter speak volumes about the effects of Naloxone in the drug community. Support groups have lobbied to change sentiment toward those addicted to heroin, with a primary focus being on rehabilitation. Laws designed to mitigate the devastating impacts of heroin overdoses are growing in popularity. One such example is the Good Samaritan Law, which grants immunity from prosecution for minor drug possession and/or being under the influence for people who request assistance at the scene of a drug overdose. Additional measures include making naloxone available at pharmacies or treatment centers and providing take-home kits for those who are at greater risk of witnessing an overdose.

Explore the data above with our interactive look at heroin tweets.

Different colors represent different groupings. Each grouping shows words that are often found together in the same tweet. There is a total of 101 groups out of more than 16,000 tweets.

The purple group is broad, containing a large corpus of words often found in heroin tweets. The other colors are targeted, calling out specific types of heroin tweets or topics.

A small grouping is made around the words “bible,” “heroin-laced,” “jail,” “pair,” “sheriff,” and “smuggle.” These words all occurred often in tweets about a specific incident.

Roll over a colored dot to see related words. Click a dot to see more information about it. Click the large heroin dot to restore the other dots. You can zoom in and out with your mouse scroll wheel. 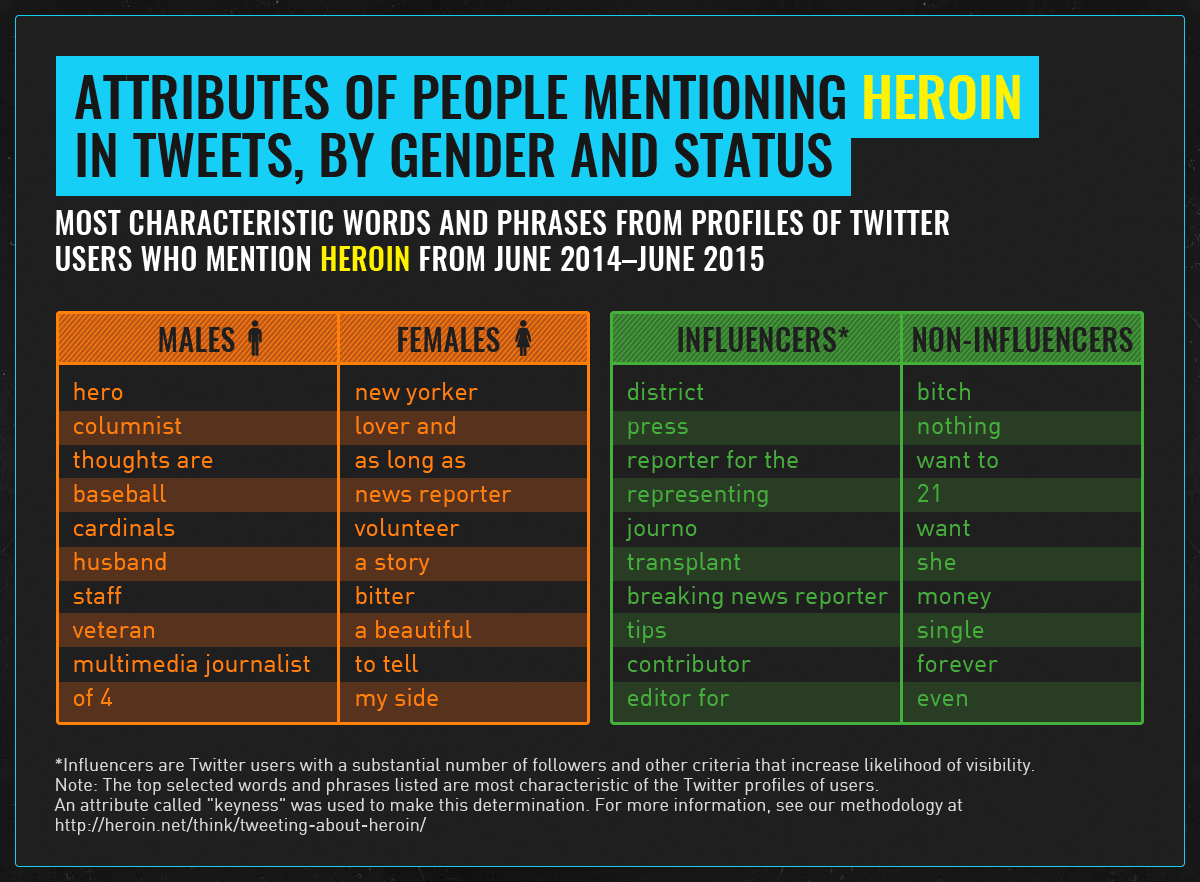 We looked at the profiles of people who tweeted about heroin over the last year. Who are they? What drives them? Many, as we saw before, have a connection to journalism. But they are real people: husbands, lovers, volunteers, fans. The non-influencers seem particularly enamored with youth, desire, angst, and sometimes sorrow. 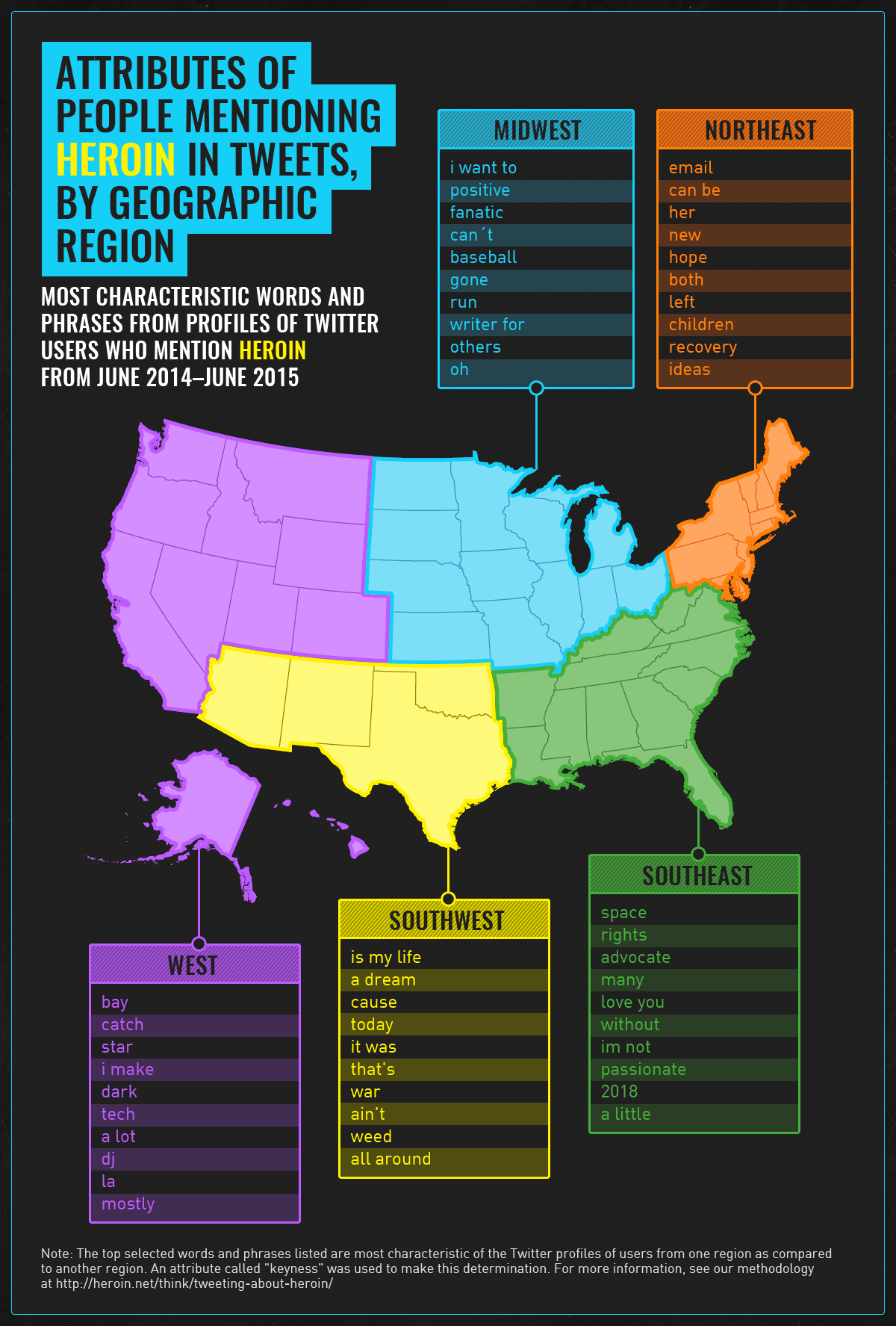 The people who tweet about heroin are a microcosm of the world. No matter where you are, the sad tendrils of this drug can reach you.

On the West Coast, the words “bay,” “LA,” “star,” and “tech” are used, which sounds very Californian. In the Midwest, there is an abundance of “writers,” “fanatics,” and “baseball.” Ascribing meaning to the words that surface in other regions is elusive.

In some cases positive aspirational messaging is raising to the top. Seeing words like “a dream,” “passionate,” “I want to,” “hope,” and “recovery” in a profile tells us something about the kind of people who have tweeted about heroin.

Heroin abuse was once an issue that lived in the shadows, rarely seen and rarely discussed. Now it’s become a visible, public issue. Twitter shows us the reverberations of the heroin epidemic: its effects on communities, loved ones, lives, and even attitudes. When the problem of heroin has become so widespread that it’s visible in social media, there’s a clear justification for increased services and treatment addressing this dangerous addiction.

If you are seeking relevant and supportive communications about heroin on Twitter, try searching using hashtags like #addiction and #recovery.

If heroin dependency is taking its toll on you or someone you know, we can help. Visit our site at Heroin.net or call 1-888-496-8059 Who Answers? to get started on your path to recovery today.

Keyness of terms was calculated by comparing the rate of occurrence of words in the “heroin” tweet collection versus a large sample of U.S. tweets over a one-month period (May 2015, 63 million U.S. geo-located tweets from the public API).

User gender was determined by user first names against the Social Security database of top 1,000 names, as Twitter does not officially record gender in user profiles.

The influencer threshold was determined by a user meeting these three criteria: (1) at least 380 followers, (2) at least 10% more followers than followings (>1.1 followers:following ratio), and (3) was listed by others at least 7.3 times per 1,000 followers. These factors combined suggest a greater likelihood of tweets actually being seen and making impressions. All three factors are true for approximately 10% of Twitter users (e.g., 10% of users are influential and 90% are not, based on this threshold).

The network graph view was built from two-word phrases occurring in the “heroin” tweet collection. Those were modeled in Gephi for clustering (modularity) and layout and then rendered in SigmaJS for the explorable, interactive web page version.

We grant permission to use the images found on this page freely. When doing so, we ask that you kindly attribute the creators by linking to Heroin.net and this page so your readers can learn more about the project and its methodology.