The CDC now estimates that anywhere from 2.7 to 3.9 million people in the U.S. are living with chronic hepatitis C infection.

And this is no minor illness – hepatitis C leads to a chronic infection in 75 to 85% of people and, over time, increases one’s risk for cirrhosis, hepatocellular carcinoma, liver failure and death. Treatments to manage or cure hepatitis C are very expensive and inaccessible to many, and health insurance providers often will not cover such medications. 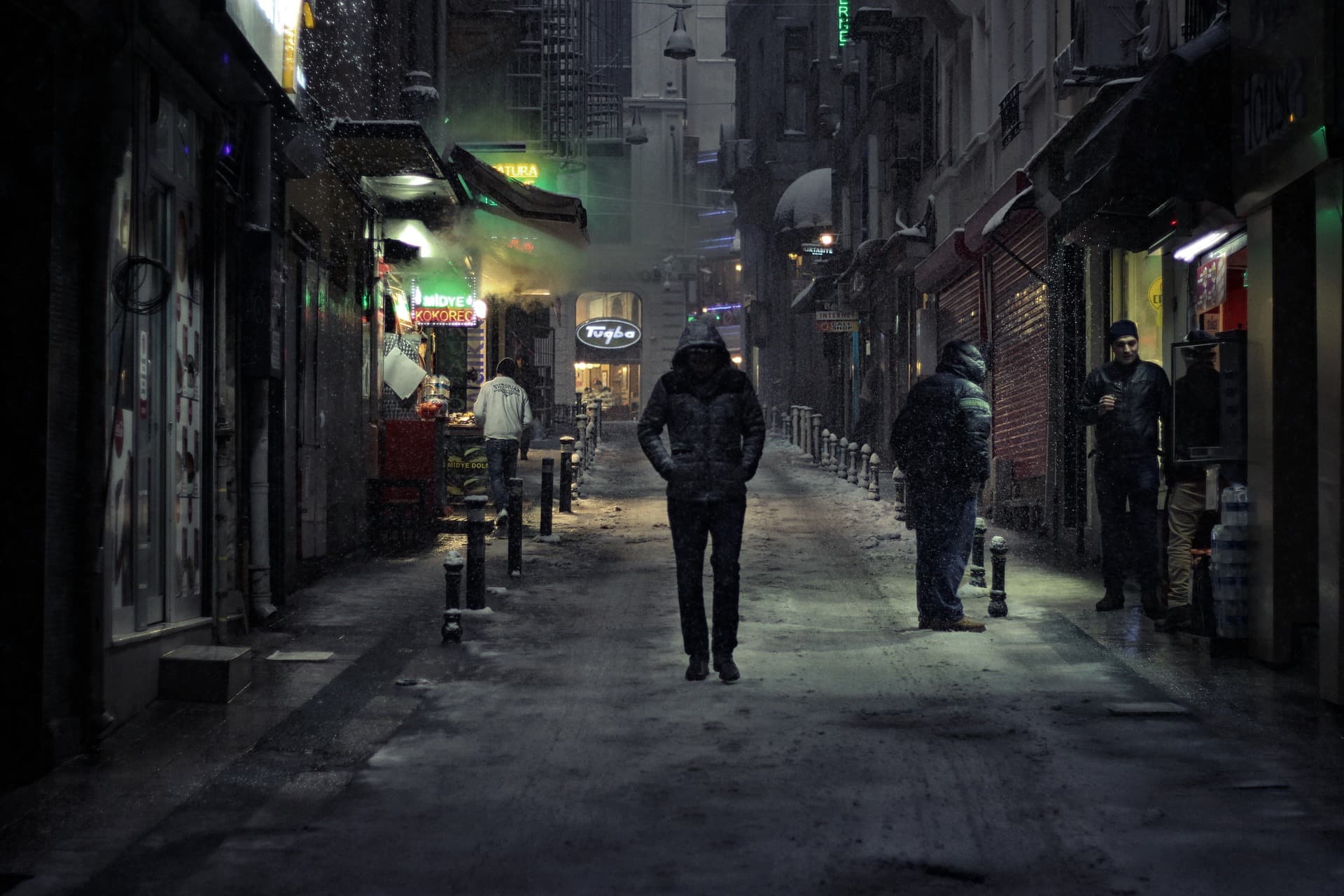 Hepatitis C is bloodborne and often spread through needle-sharing while injecting illicit street drugs such as heroin. For this reason, the spread of hepatitis C can be linked to shifting trends in drug usage as well as access to clean syringes through syringe exchange programs. These programs provide new, sterile syringes to intravenous drug users while disposing of old and used syringes. This allows them to avoid spreading or contracting diseases from needle sharing.

While the idea of providing syringes to illicit drug users may seem counter intuitive, and has often faced political opposition, these programs reduce theharm to individuals who would otherwise be injecting unsafely regardless, and they are not known to increase or encourage illicit drug use. We decided to take a look at state-level availability of syringe exchange programs and associated services, compared to state levels of hepatitis C and HIV.

Which states most need these syringe exchange services? And which states aren’t providing the help that drug users need?

Read on to see how the landscape of hepatitis C transmission and syringe exchange is changing across the country. 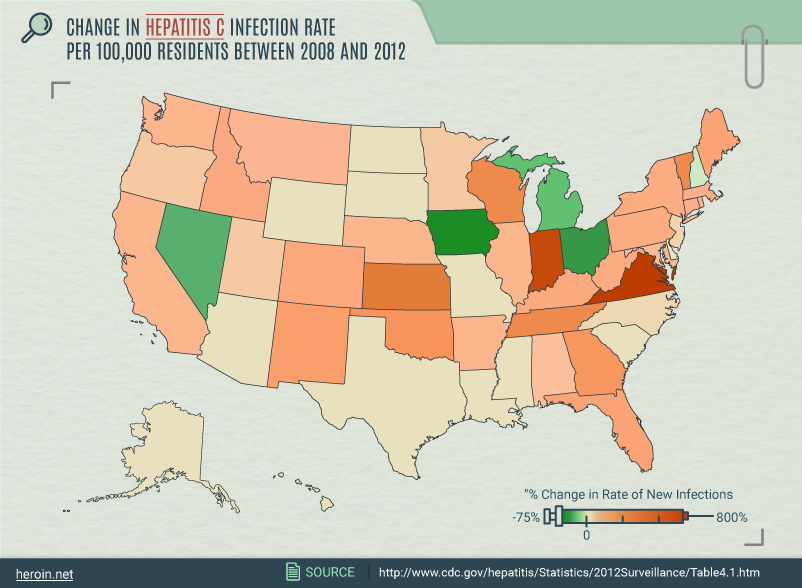 A National Spike in Hepatitis C

33 states reported a rise in acute hepatitis C rates from 2008 to 2012, while only four reported decreasing rates.

One of the sharpest increases was seen in Kentucky, where rates of reported new acute hepatitis C infections rose from 1.6 per 100,000 people in 2008 to 4.1 per 100,000 in 2012. Tennessee’s rates grew fivefold, while Oklahoma’s more than quadrupled.

And on a national level, the number of new acute cases more than doubled over that time. 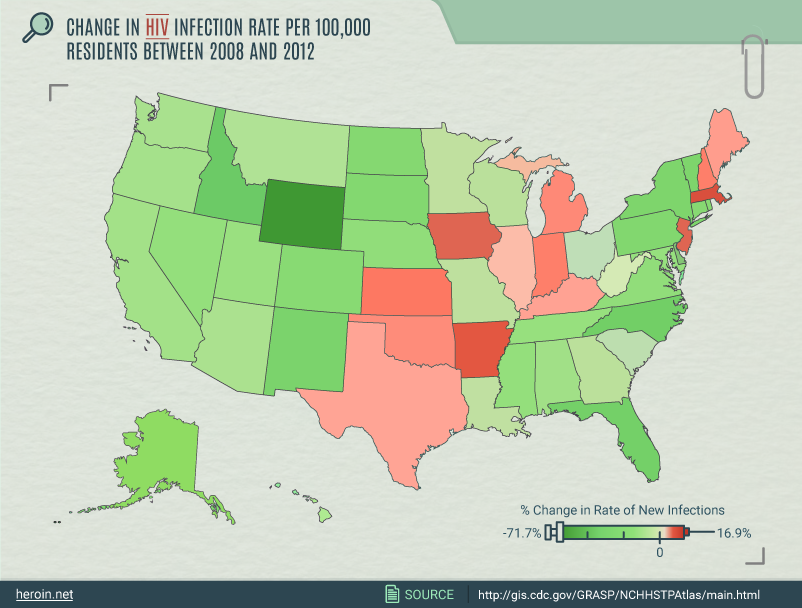 Even though hepatitis C cases rose sharply, new diagnoses of HIV – another infectious disease that can spread by needles – did not rise.

In more than 30 states, rates of new HIV diagnoses decreased from 2008 to 2012, while HIV diagnosis rates rose in fewer than half as many. 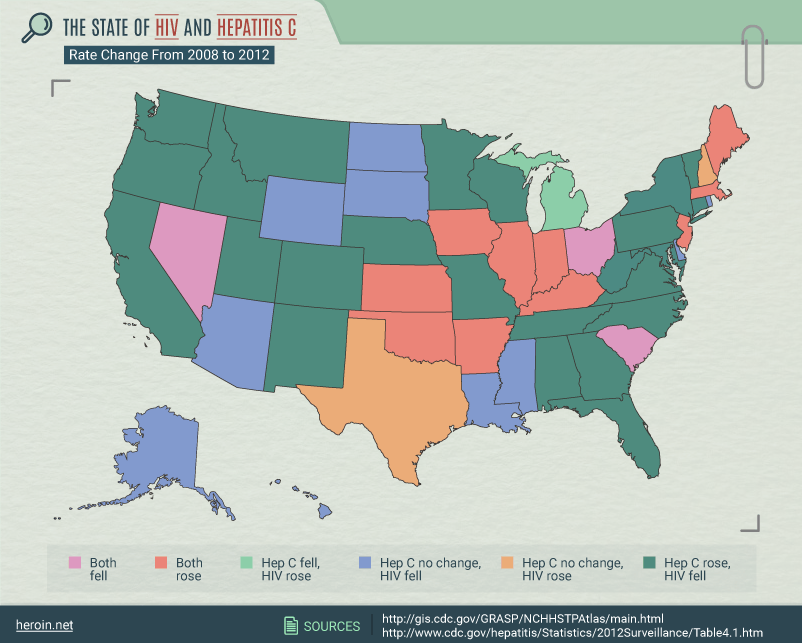 Examined together, there’s a visible contrast between changes in rates of new cases of hepatitis C and HIV.

Nearly half the country saw a rise in hepatitis C cases and a fall in new HIV cases – but the opposite is true in only one state. And while 10 states show a rise in both conditions, only three states show a decrease in both.

Nationally, the country is contending with a significant shift from HIV to hepatitis C as one of the bloodborne infections of greatest concern, and hepatitis C complications are now responsible for more deaths than HIV-related illnesses. 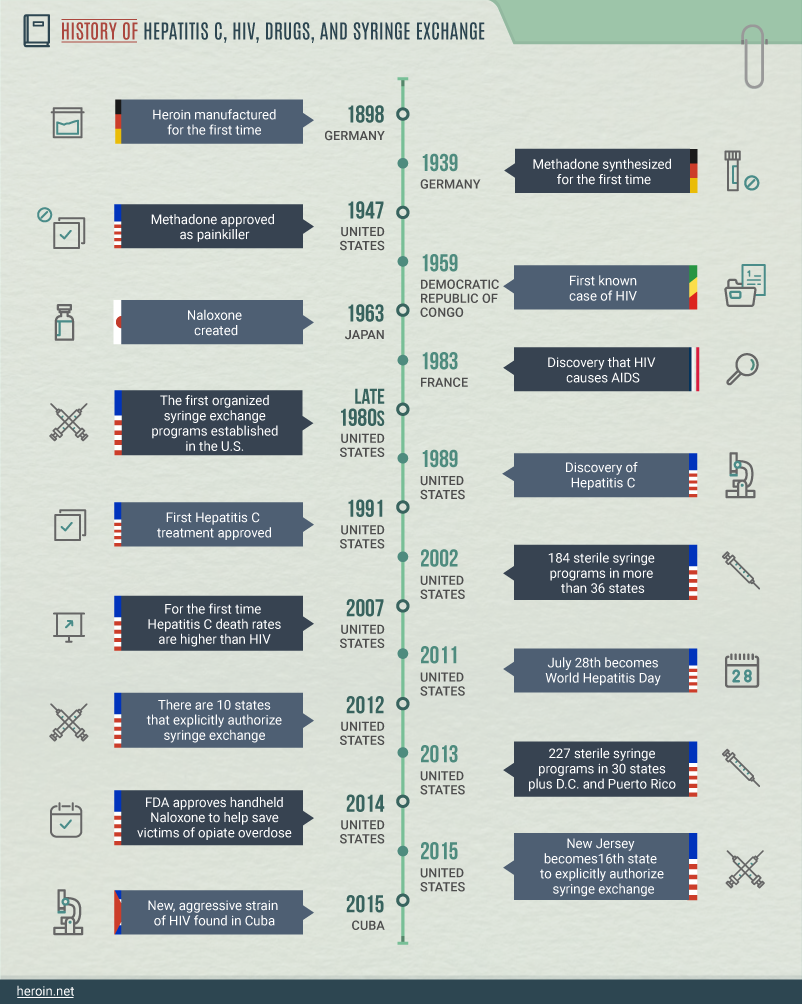 A Modern History of Bloodborne Illnesses and Syringe Exchanges

The fascinating historical interplay of hepatitis C, HIV, intravenous drug abuse and needle exchange programs is one that didn’t take shape until the last quarter of the 20th century.

Although heroin was first synthesized in 1898, it wasn’t until the late 1980s that syringe exchange programs were established in the United States. 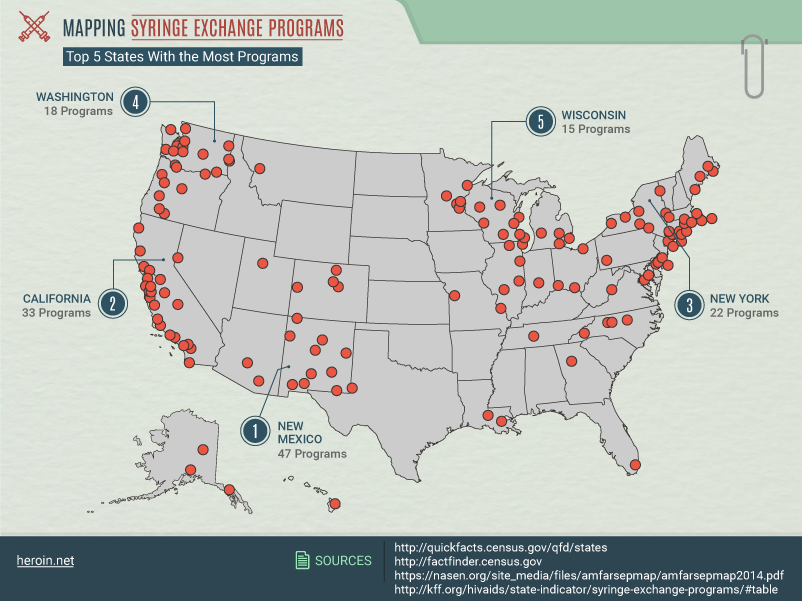 How Syringe Exchanges are Distributed Across the U.S.

Nationally, local syringe exchange programs are densely packed along the west coast and eastern seaboard. But while California has 33 such programs and New York has 22, it’s New Mexico that comes in first place with 47 programs in the state.

But perhaps most notable is how little the distribution of these programs can align with the need for them. California, New York, and New Mexico have all shown a growth in cases – yet Kentucky, with the greatest increase in acute hepatitis C cases from 2008 to 2012, has no syringe exchange programs in the entire state.

Oklahoma and West Virginia, both near the top in terms of hepatitis C spread, likewise have zero programs. And Indiana, where syringe exchanges were previously banned, is now rushing to implement these programs after an outbreak of HIV. 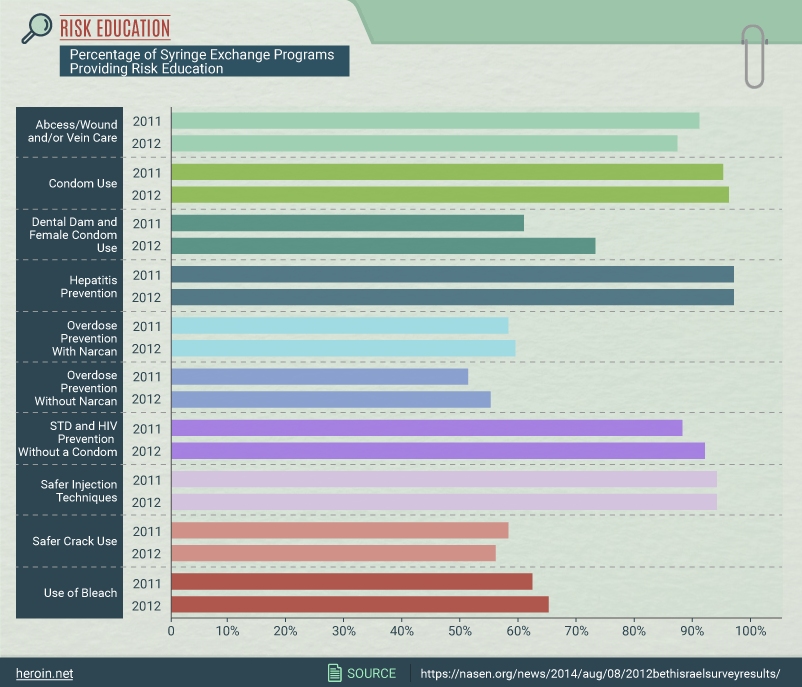 These programs also don’t limit themselves to providing clean and sterile syringes. They provide a great deal of additional assistance in a variety of areas related to the safety and health of injection drug users.

Over 90% of these programs offer education on preventing the spread of hepatitis, and nearly as many provide information on caring for the wounds and abscesses that can result from injection drug use.

Additionally, over 60% educate service users on employing bleach to reduce the risk of transmitting diseases such as hepatitis C via needle reuse. 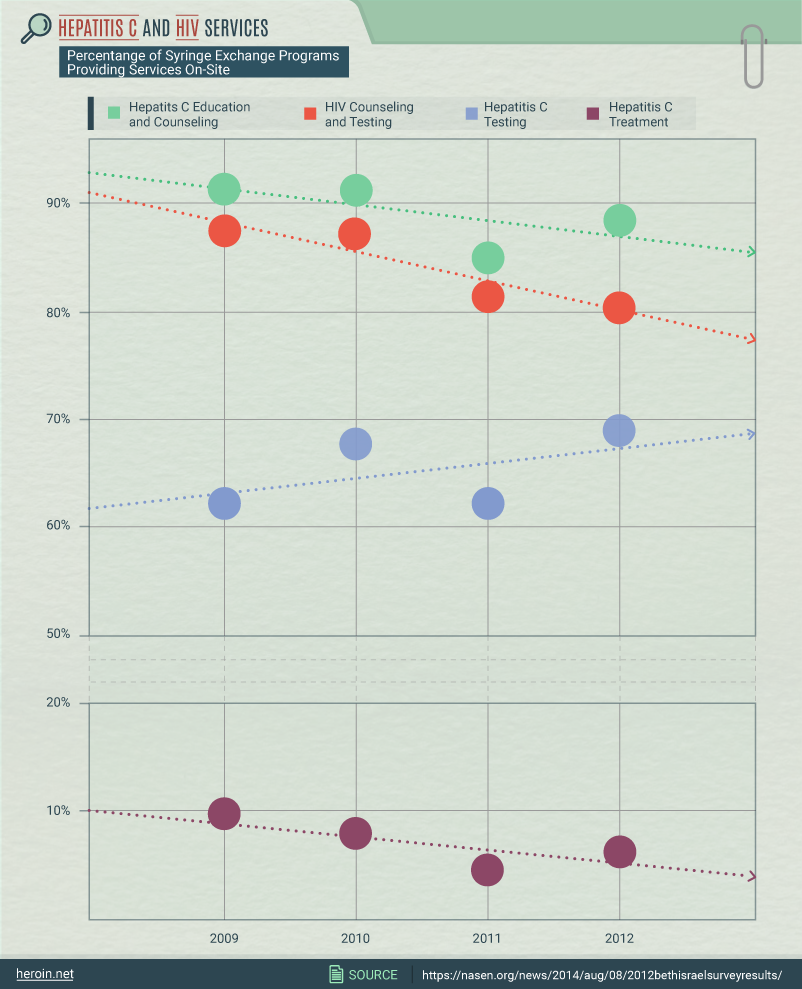 Given the link between injection drug use and hepatitis C, many of these syringe exchanges offer health services pertaining to hepatitis C specifically.

As of 2012, 80% of syringe exchanges offer on-site counseling and testing for hepatitis C. A smaller number, currently fewer than 10%, have begun to offer the option of on-site treatment for hepatitis C infection as well.

Altogether, these programs demonstrate the possibilities for stemming the spread of hepatitis C by directly serving the people who are most at risk.

Get Help – Take Your Health Back

Use of injection drugs, such as heroin, is hazardous in more ways than one. Users have to face not only the risks of drug use and overdose but also the dangers of transmitted illnesses via reused and blood-contaminated needles.

*Please feel free to use any of the assets found here. When doing so, please attribute the creators by linking back to this project so your audience may access all the data and learn about how it was collected.